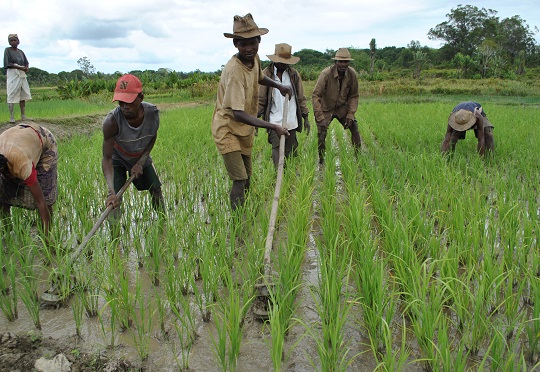 Madagascar’s three key rice farming regions have witnessed an unprecedented transformation, with yields per hectare virtually tripling over the past five years, thanks to investments totalling $148 .28 million by the African Development Bank in the region’s agriculture infrastructure.

Farmers in the lowland regions of Bas Mangoky, Manombo Ranozaza and Taheza are not only seeing their incomes grow, but they are also standing up successfully to a drought and food crisis that has plagued the south of the country since 2016.

In 2010, yields were only 2.5 tonnes of rice per hectare. Five years later they have about tripled to 6 tonnes per hectare. Rice harvests for the two crop seasons in 2017 in Bas Mangoky, Manombo Ranozaza and Taheza averaged nearly 10 tonnes per hectare, bringing total produce to nearly 50,000 tonnes.

The total land area under rice cultivation in the three regions now covers 12,080 hectares, with rice production expected to total 107,000 tonnes annually by 2020.

The Indian Ocean island suffered a serious political crisis in 2009 but the Bank maintained its support throughout this difficult period while most other donors suspended funding.

The State of Madagascar and the Bank agreed to keep development projects in the three rice-growing areas going, assuring continued improvement in the quality of life for rural inhabitants.

Bas Mangoky, some 220 km north of Toliara, is one of Madagascar’s most important rice-growing regions, with a developed area of 5,800 hectares. The area has been continuously extended over the last decade and the Malagasy authorities are pushing to double it over the coming months.

Work on a new extension to this irrigated area has been progressing since March 2015 as part of a project due for completion in March 2020, funded by the national Government through a $56.5‑million loan from the Bank.

The work includes construction of irrigation networks and a main 24-km canal. When completed, the zone will have a cultivable area of 10,000 hectares, with rice production expected to reach 80,000 tonnes per year. Farmers here earn additional income from Madagascar beans, also known as butter beans or Lima beans, which they grow alongside rice for export.

At the launch of the works in June 2017, the Resident Representative of the Bank, Abdelkrim Bendjebbour, said the project was intended to deliver both commercial and social benefits. One challenge looks to be well on the way to being met, as the country is expected to begin a significant decrease in malnutrition and poverty by 2020, while also slashing its food import bill.

The Bas Mangoky rice-growing area is irrigated via a 20-km canal bringing water from the Mangoky River, the largest river in Madagascar. Some 55,000 people, 33 % of them women, own the land they work.

The Bank committed to the project through an initial loan of $11 million from the African Development Fund closed in 2008, followed by a further ADF credit of $16.5 million closed in 2015.

Buoyed by the success in Bas Mongoky, the government of Madagascar sought further assistance to develop two additional irrigated areas — Manombo Ranozaza and Taheza – to bolster the country’s food security.

Manombo Ranozaza, 70 km north of Toliara, was refurbished and modernized between 2009 and 2012 as part of the South-West Region Agricultural Infrastructure Rehabilitation Project (PRIASO).

Work on its extension will also begin within a matter of months, thanks to an ADF loan of $12.6 million. The expansion of this 5190-hectare area (including 2780 hectares for rice production) is expected to boost annual rice production to 22,500 tonnes per year, reducing poverty in an area where 30,000 growers will benefit directly from the project.

A year ago, some plots in the area experienced irrigation problems related to defective secondary canals, but these were repaired before they could impact negatively on the harvest.

The 2440-hectare Taheza area to the south-east of Toliara provides a yield of 3 tonnes per hectare and a total annual production of 5000 tonnes. Even though it is considerably smaller than the other cultivation areas, it is nonetheless an important rice-growing centre in the south-west on which more than 20,000 people depend for their livelihoods.

The transformation of Taheza has been nothing short of phenomenal. Twenty years ago, Taheza was abandoned and its irrigation system fell into disrepair. But the various funding support packages granted to PRIASO by the African Development Bank have enabled its complete refurbishment, including reconstruction of the main canals of its supply dam and the maintenance of its access roads.

Rice cultivation was relaunched in Taheza two years ago. And in addition to farmers, members of the armed forces specializing in development work and local prison staff have also been active in off-season rice cultivation in this area, according to local press reports.

“The Bank’s achievements in the South-West Region really are very significant on the ground,” said a report of a Bank project visit in June 2018. “We now need to consolidate these gains through greater involvement of the private sector, in order to provide agricultural product processing and marketing links currently missing from the chain. The production link, moreover, also needs to be modernized through the involvement of modern small and medium-sized farms.”

The African Development Bank began operations in Madagascar in 1977. In the period from then to 31 December 2017, the Bank approved 89 operations, mainly in the transport, industry, finance and agriculture sectors, with a total value of $1.88 billion.