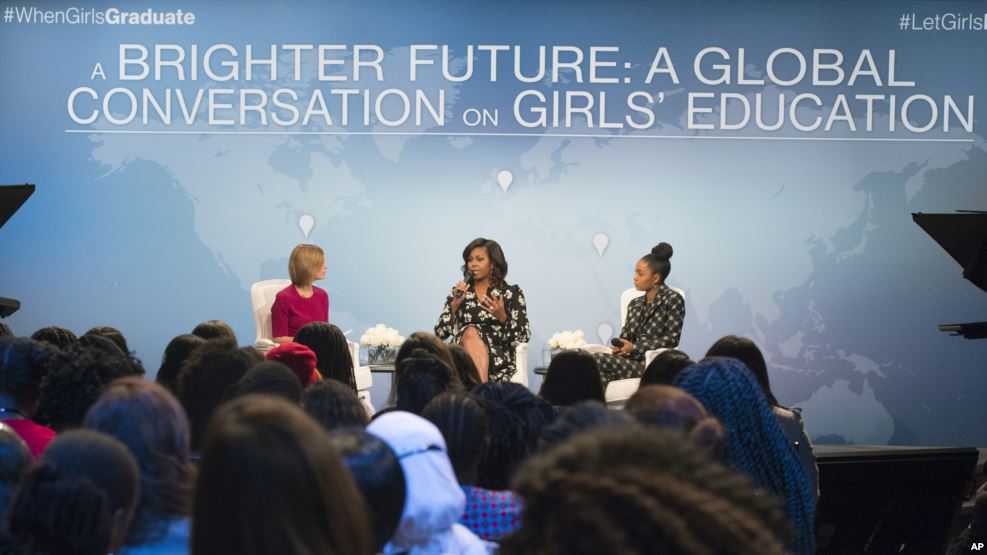 U.S. first lady Michelle Obama has issued a global appeal to help girls throughout the world overcome obstacles and get the education they need to have meaningful and productive lives.

Obama’s appeal came on the International Day of the Girl, established by the United Nations General Assembly in 2011 to recognize “girls’ rights and the unique challenges girls face around the world.”

In an op-ed Tuesday on CNN.com, Obama called for support of “Let Girls Learn,” a global effort promoting education for girls who are not in school.

The First Lady recalled her inspiration for the initiative came after meeting a few years ago with Malala Yousafzai, who was shot and critically wounded by the Taliban in Pakistan for trying to attend school.

“I saw that the terrorists who nearly killed her were trying to silence her voice, snuff out her ambitions, and take away her power,” Michelle Obama said. “There are tens of millions of girls like Malala in every corner of the globe who are not in school – girls who are so bright, hardworking and hungry to learn.”

‘Big plans for their lives’

Last summer, Michelle Obama visited the African countries of Liberia and Morocco where she said many girls struggle to get an education. She spoke with girls in those countries, along with actors-activists Meryl Streep and Frieda Pinto and CNN anchor Isha Sesay. They encountered girls who struggled with poverty, dangerous daily commutes to and from school and cultural pressures drop out of school, get married and have children.

“But these girls have big plans for their lives,” Obama said. “They want to attend college and become doctors, teachers, engineers, entrepreneurs; and day after day, they do whatever it takes to get the education they need fulfill their dreams.”

Obama said she is living proof that the dreams of young girls can be realized. She wrote that neither her parents nor most people in the neighborhood where she grew up in Chicago attended college. Still, she said she was able to graduate from two of the world’s most prestigious schools, Princeton University and Harvard Law School, thanks to “a lot of hard work and plenty of financial aid.”

Despite not having the authority as first lady to make laws or establish budgets, Michelle Obama said “Let Girls Learn” has thrived since it launched last year. Countries and some of the world’s largest companies and organizations have donated money and resources to the program.

Canada, Mexico and the Nordic countries are collaborating, and countries like Japan, South Korea and Britain have pledged nearly $600 million. The U.S. is investing more than $1 billion and is operating “Let Girls Learn” programs in more than 50 countries. The World Bank will invest $2.5 billion in the program in the next five years.