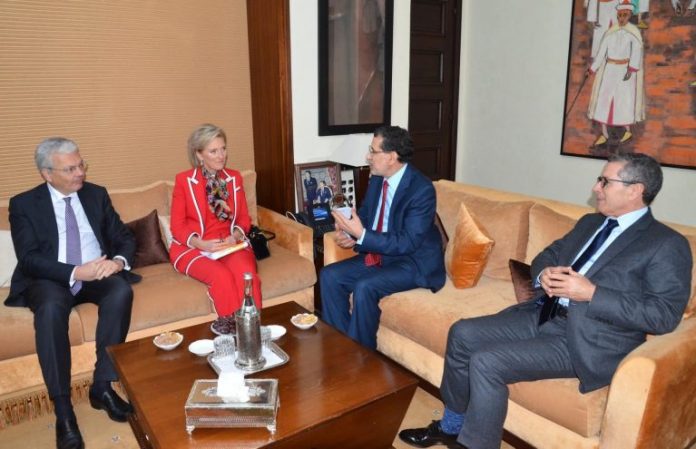 An official on Princess Astrid of Belgium’s trade delegation has said Morocco’s position as gateway to Africa could benefit Antwerp and Zeebrugge.

El Othmani and Princess Astrid recognized that there are opportunities to boost economic cooperation between Morocco and Belgium.

During the meeting, El Othmani emphasized: “the particular interest that Morocco grants” to its partners by opening up its economy to the outside, according to a statement from his department.

“We want to strengthen cultural, human and economic ties with Belgium,” Othmani said after the meeting. “We have the ambition to strengthen relations, not only between Belgium and Morocco, but also (to go) a step further, in an African context.”

Belgian Minister of Foreign and European Affairs Didier Reynders said, “We have extensive cultural and historical ties, but the economic potential is much greater than what is achieved today,” he said. He noted that a community of more than 500,000 people of Moroccan origin live in Belgium, Belgian magazine Le Vif reported.

Flemish Minister-President Geert Bourgeois stated, “Trade relations with Morocco are still too limited.” He noted that Flanders accounts for 86-87 percent of Belgian exports to the North African country. “But we are only talking about 771 million euros,” he said. “But we both have more to offer,” he said.

in the first six months of 2018, Belgium exported €439.3 million worth of goods to Morocco, representing a 2 percent increase over the same period of 2017.

Imports of Moroccan products to Belgium dropped to €172 million, a decrease of 6.6 percent compared to the same period of 2017.

Morocco is Belgium’s 44th biggest export destination and its 61st import supplier, according to the Belgian Agency for Foreign Trade.

The agency estimated exports of Belgian companies to Morocco at €889.7 million and imports at €332.8 million in 2017.

Morocco, according to Bourgeois, is investing not only in conventional infrastructure but also in many other sectors where Flemish companies excel, such as renewable energies and water purification.

Bourgeois went to Kenitra, north of Rabat, where the Waterleau company built a wastewater treatment plant. The Belgian delegation also attended the presentation of a wind turbine project of the Belgian-Dutch company WindVision.

Bourgeois said that Morocco is increasingly presenting itself as a gateway to Africa, an evolution that could benefit the ports of Antwerp and Zeebrugge.

During the meeting, El Othmani spoke about Morocco’s achievements in improving its business climate and investment promotion.

Morocco jumped 9 places and ranked 60th in the World Bank’s “Doing Business” 2019 report out of 190 countries.

Morocco aims to be among the top 50 countries in the Doing Business rankings by 2021, El Othmani stressed.

Morocco’s efforts have positively impacted the flow of foreign direct investment, which has improved significantly, added the prime minister.

Reynders stressed the reforms that Morocco is undertaking and which should lead to stability. “I am very happy to see Morocco evolve,” and that Belgians could contribute to Morocco’s stability, he said.

The Belgian foreign minister cited the example of the consortium of the Belgian group Besix and the Moroccan construction company of Casablanca (TGCC), which were assigned last month to design and construct what is to be Africa’s tallest tower, Mohammed VI Tower, in Rabat.

Princess Astrid is currently on a business visit to Morocco at the head of a large Belgian delegation of 460 businessmen, entrepreneurs, and ministers.

The delegation members will hold meetings with Moroccan businessmen to establish “fruitful partnerships,” he added.

The official trip, which will continue until November 30, aims to boost trade between the two countries.

The delegation will conclude the visit with a signing ceremony for a series of agreements and memoranda of understanding.