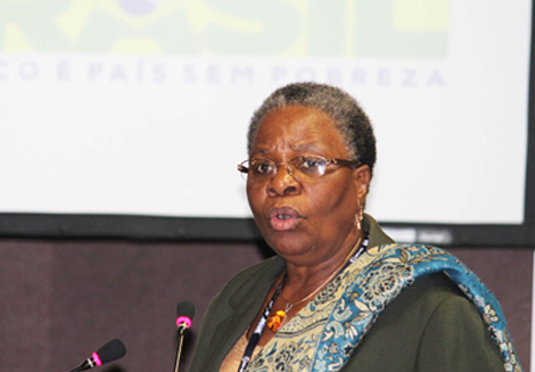 Namibian Deputy Prime Minister Netumbo Nandi-Ndaitwah says droughts should not be seen as a disaster, but rather a risk which could happen at any time and which should be managed.

Addressing the Africa Drought Conference which was held in Windhoek last week she said that the government already allocated 11% of its budget to agriculture and related ministries for food security in agreement with the Maputo Declaration during which SADC countries agreed to allocate 10% of their budgets to agriculture.

She further said that Namibia has to collect N$695 million in order to provide food to the affected communities until the end of the rainy season in March 2017 when farmers are expected to harvest from their fields.

Unfortunately nothing was said about drought relief aid to producers. The conference is a result of a decision which the United Nations Convention for Combating Desertification took in 2013 and African countries were well represented at this conference with more than 400 local and foreign delegates present.

During the course of the week a working group drafted a framework which will be known as the “Windhoek Declaration on Drought Resilience in Africa”.

The Drought Conference started with a technical part where various bodies such as the African Youth, civil society, the FAO, the United Nations as well as the minister of environment, Pohamba Shifeta, gave their viewpoints regarding a strategic framework for the speeding up of resilience against drought in order to alleviate poverty and stimulate economic growth.

Many lectures were given which covered all aspects for the preparation and control of droughts and climate change.

As part of the Windhoek Declaration, which includes the strategic framework to combat drought in Africa that was adopted last Thursday, the conference decided against setting up a fund for financing drought emergencies but to seek alternative ways of raising the funds.

Tourism minister Shifeta said the conference had looked at the practicality of financing drought emergencies without establishing a trust fund.

The Namibia Agricultural Union was by turns represented by the executive manager, the manager: research and development as well as the manager: commodities.