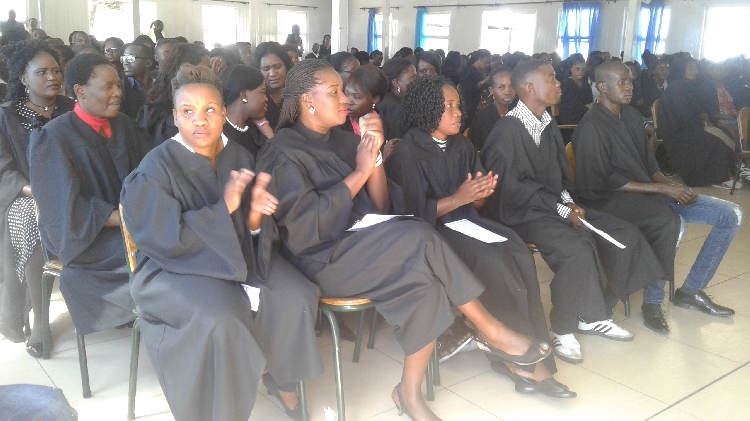 In Namibia, the term “struggle kids” is used to refer to youths and children born in exile under the care of the liberation movement, now the ruling party; Children who are of the liberation struggle. For almost five years now, ‘the Children of the Liberation Struggle’ have petitioned the government on to their rights and needs. This has caused a raging debate in Namibia.

Recently in Zambezi region, the Simon Mutumba Training Centre convocated about 243 “struggle kids” who have concluded a seven-months civic and vocational training.

The Secretary to Cabinet George Simataa was represented by the poverty eradication permanent secretary I-Ben Nashandi, who read out his speech at the graduation. According to the letter, he said “I call upon those children of the liberation struggle at the Ndilimani camp outside Windhoek to demobilize and join hands with government to assist them. Government has announced on several occasions that it is not going to deal with them while they are camped at various places in the country,”

To encourage these fresh graduates the government has provided jobs at various government institutions which they are expected to start working from 1 July 2017.

“You may recall that government gave the understanding to assist you in finding jobs upon the completion of your training here at Simon Mutumba, which is the commencement of your academic life. The government has honored that promise, and all of you will receive your appointment letters today,” Simataa said.

Deputy Youth Minister Agnes Tjongarero said the involvement of the “struggle kids will help to decrease the unemployment rate amongst youth.

“It was deemed necessary to impart skills to equip the young people for the job market and to expose them to life’s norms and work ethics.

“In this context, a training program was conceived covering two components, namely civic training, and skills training. Civic training is a premeditated process deliberately intended to position you to face challenges head-on throughout your lives,” she noted.