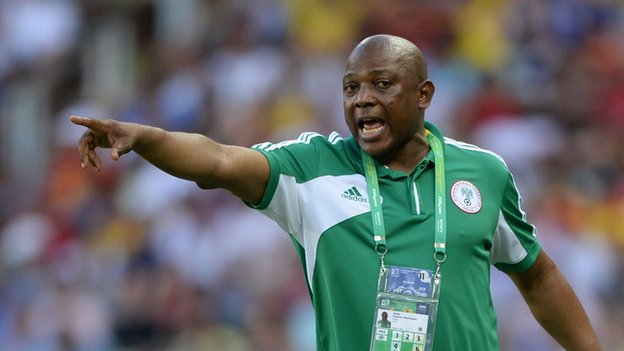 The Executive Committee of the Nigeria Football Federation held a meeting in Abuja Yesterday, to discuss important issues in Nigerian football and resolved as follows:

1) The Committee, unanimously, praised the excellent contributions of the technical crew of the Senior National Team, Super Eagles, led by Mr. Stephen Keshi, to the glorious accomplishments of the team in the past three years, and hailed Keshi, Daniel Amokachi and Ike Shorounmu as true national heroes. However, in the interest of Nigeria football and the desire to ensure qualification for the 2015 Africa Cup of Nations finals, the Committee decided to relieve them of their duties with immediate effect.

2) In recognition of their contributions to the Nigeria game, the Executive Committee also approved that the trio of Keshi, Amokachi and Shorounmu should proceed to any coaching course of their choice in any country of their choice to build their capacity, at the expense of the NFF. All their entitlements will be paid within the next fortnight.

3) Committee also, unanimously, approved the appointment of a consortium of coaches to lead the Super Eagles for ONLY the two concluding matches of the 2015 Africa Cup of Nations qualifying series (against Congo in Brazzaville and against South Africa in Uyo), after which an expatriate Coach will be appointed. The consortium, led by Amodu Shaibu, also has Salisu Yusuf, Gbenga Ogunbote and Aloysius Agu. The team also has a new Coordinator in former international Garba Lawal, while Toyin Ibitoye is the new Media Officer and Godfirst Chike is the new Equipment Manager. Team Secretary, Enebi Achor, is retained.

4) The Committee also appointed Mr. Samson Siasia as the new Head Coach of the U-23 Men’s Team. He will be assisted by Fatai Amoo, while the Technical and Development will recommend the other members of the crew.