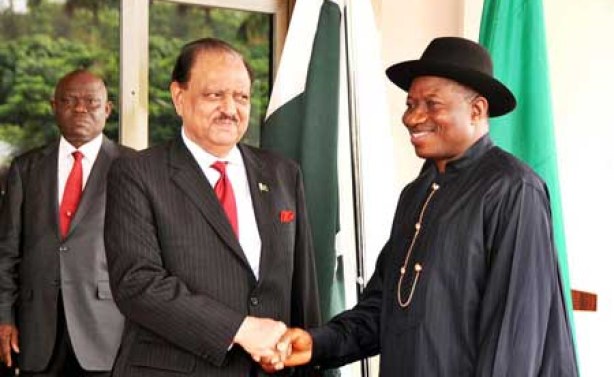 Nigeria and Pakistan yesterday resolved to collaborate on war against terrorism.

The two countries are equally poised to improving their bilateral trade from the current below $100 million to $1 billion in the next five years.

The revelation came to the fore when President Goodluck Jonathan signed bilateral trade agreement with his counterpart from Pakistan, President Maroon Hussain, at the Presidential Villa in Abuja.

This was as the government of Sri-Lanka equally expressed its deep concern over the spate of violence and increase in terrorist attack by the Boko Haram sect in the country and expressed its readiness to share her experience in tackling the scourge.

Jonathan described the visit of Hussain as unique because it was the first ever state visit by any Parkistani President.

He emphasised that the bilateral discussions between the duo were based on issues of common interest.

The president noted that just like Nigeria was suffering from terrorist attack, Pakistan too was experiencing such. Jonathan further drew comparison between the two countries, saying just as terrorists were breaching the security of Pakistan, Nigeria was still battling on how the abducted schoolgirls can be freed from the hands of the terrorists.

“Pakistan have been relating very well with a number of African countries, they are members of so many international bodies, the United Nations, Common Wealth, OIC, D8, and at all international level Pakistan and Nigeria therefore, relates very well.

“Recently, they cooperated with us when we wanted to get into the security council as non-permanent member. Of course, we will also reciprocate when it is their time, because one good turn deserves another,” President Jonathan said.

In his remarks, the Pakistani President stressed the need to institutionalise the existing economic partnership, air services agreement and exchange of prisoners, in addition to the agreements on oil and gas, education, agricultural and industrial development.

Hussain said he would open a Pakistan Commercial Station in Lagos today, with a view to enhancing the cooperation efforts, and boost counter-terrorism measures of both countries.

He welcomed Jonathan’s acceptance of his offer to visit Pakistan at a date to be decided through diplomatic channels. Also, the leader of the Sri-Lanka’s delegation to Nigeria and acting Minister of External Affairs, Hon. Neomal Perera, stated this in Abuja while paying visit to the Minister of State for Defence, Ambassador Musiliu Obanikoro

Perera said the aim of his visit was to strengthen bilateral relations and maritime cooperation between the two countries in solving piracy and terrorism.

He said the government of Sri-Lanka was seriously concerned about the problem of terrorism in the country, while expressing condolences to the people and the federal government over the loss of lives caused by the kidnapping and indiscriminate bombings by Boko Haram sect.

According to him, “We in Sri-Lanka deeply have empathy and we assured you of our steadfast resolve in identifying with you in the scourge of terrorism. We are deeply concern with this reappraisal incident.”

He revealed that the president of Sri-Lanka conveyed a meeting with his armed forces in order to share with Nigerian the experience they had in wiping out all forms of terrorism so that the scourge of terrorism would be eliminated in Nigeria also.

Perera stressed further that the government of Sri-Lanka submitted a proposal to Nigeria on the need for maritime cooperation and after several meetings between the officials of the two countries led to the signing of Memorandum of Understanding (MoU) on the modalities of maritime cooperation.

He added that the delegation was in Nigeria to finalise the arrangement stipulated in the MoU as it continues to honour international obligation in repressing see piracy.

The leader of the delegation noted that due to the proliferation of sea piracy in many parts of the world, the United Nation (UN) had urged all countries to tackle sea piracy that was considered very important, and that in Sri-Lanka’s obligation to honour international interest and responsibilities stipulated by the UN took proactive steps to supporting counter piracy in the India Ocean or Arabian sea.

Meanwhile, Obanikoro said he was able to find out through his research that the problem of insurgency the country was witnessing now that Sri-Lanka battled it for 40 years before being able to overcome the challenge.

He added that the delegation couldn’t had visited Nigeria in a better time given the wealth of experience the delegation would bring to the table as the country battles with insurgency.

The minister pointed out that, “we have also gone through the period of civil war and overcome, so I have no doubt in my mind that this phase that we are going through that we are going to overcome but my prayer is that it won’t take as long as forty years to resolve.”