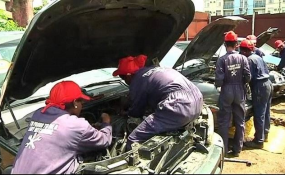 The Federal Government has recently promised to help in the mass production of a car being developed by some female artisans under the Lady Mechanic Initiative.
Minister of Science and Technology, Dr Ogbonnaya Onu, made the promise when the Executive Director /Founder of the Lady Mechanic Initiative Sandra Aguebor led a delegation on a visit to the Minister in his office.
According to the Minister, six of the ministry’s agencies would work directly with the group to bring out a made-in-Nigeria Lady Mechanic car.
“Let me assure you that my ministry will support this initiative. Six of our agencies would help in bringing out finished product so that you can realise your dream”, he said.
He said the Muhammad Buhari administration would close the gender gap which exists in the engineering field in the country. Earlier in her address, Aguebor said the group had set a target of 15 months to complete the production of the prototype vehicle.
She said about 700 female mechanics in five states are putting heads together to produce the car, which will be the first of its kind in Nigeria.