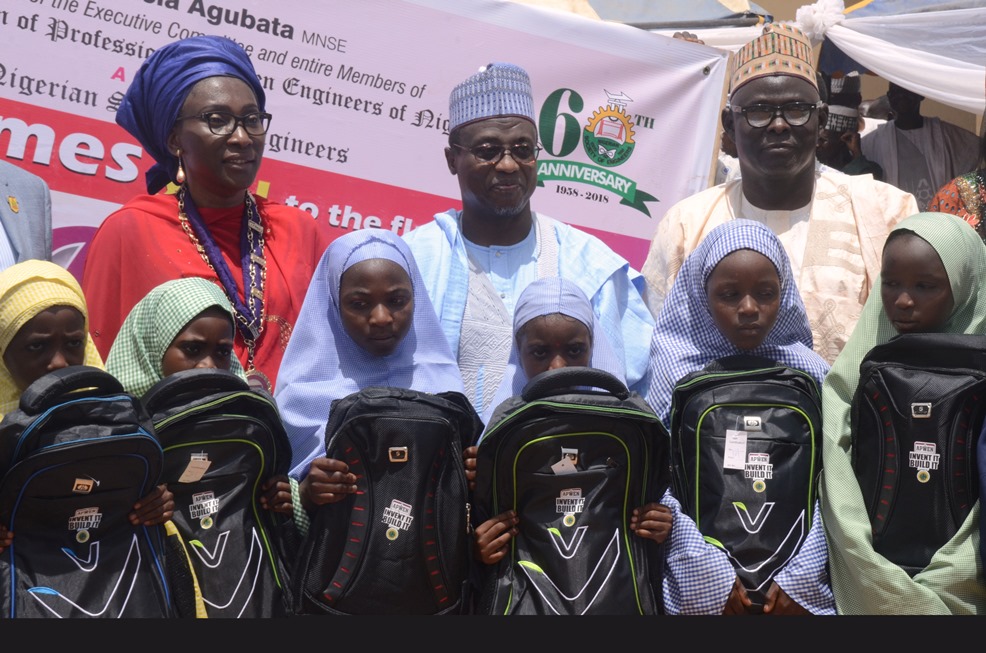 Still on the movement of empowering the African Girl-child for societal impact and individual development, the Nigerian National Petroleum Corporation (NNPC) is in partnership with Association of Professional Women Engineers of Nigeria (APWEN) on a peculiar programme tagged “Invent It, Build It” initiated by APWEN for the empowerment of the girl-child.

Speaking about the recently flagged-off programme, in Misau, Bauchi State, NNPC Group Managing Director, Dr. Maikanti Baru, stressed that the Nigerian girl-child possesses the ability to realise her full potential in the study of science, technology, engineering and mathematics.

The GMD, who expressed delight at the kick-off of the project in his alma mater, Central Primary School, Misau, Bauchi State, noted that no nation had ever achieved any meaningful development without the key subjects of Science, Engineering and Technology (SET).

The “Invent It, Build It” programme by APWEN is to inspire the girl-child (aged 8-10 in the upper primary school) to take up the sciences with a view to pursuing a career in engineering.

“The study of Science, Technology and Engineering requires an eye for details, diligence and multi-tasking ability for which women and, by extension girls, are well known.

“I would like to call on teachers and parents all over the country to encourage the study of Science, Technology & Engineering among the girl-child,” Dr. Baru stated at the ceremony.

Describing engineers as the gears of progress who help accelerate development all over the world, the GMD stressed that the engineering profession held the key to Nigeria’s technological advancement and in turn, economic prosperity.

He lauded APWEN for initiating the “Invent It, Build It” project, saying when the association recently intimated him of its desire to unveil the project, he could not resist the mentoring opportunities which the programme presents.

He said as an NNPC staff, he was very proud of the role played by engineering professionals in the corporation, among whom are engineers, scientists as well as technologists in most of its operations.

He emphasized that the corporation would continue to partner professional bodies towards promoting science, technology and engineering studies, even as he called on well-meaning Nigerians to support APWEN in its laudable initiatives.

He said the APWEN’s initiative would not only encourage young girls nationwide to study engineering, but would also spur other stakeholders across the country to invest in promoting engineering education – especially among the girl-child – for the benefit of the nation.

Speaking earlier, APWEN President, Engr. (Mrs.) Felicia Nnenna Agubata, noted that the “Invent It, Build It” programme was aimed at igniting passion for science, technology, engineering and mathematics among young girls in the country.

This, she explained, was to assist them to showcase the economic value and application of engineering in everyday life right from their primary school days up to tertiary institutions.

Agubata, who announced APWEN’s scholarship for 10 girls from Misau community from the primary school up to university level, also revealed plans to build and equip a model science laboratory for children at the Central Primary School, Misau, to the jubilation of the students.

She observed that later in the year, the “Invent It, Build It” project would continue in Akwa Ibom, Anambra, Benue, Borno, Ebonyi, Edo, Kano, Kebbi and Ogun States while in 2019, it will spread to other states in the country.

She expressed APWEN’s confidence that early contact with the target group would spark off a desire and an ambition of the girl-child to study the sciences and ultimately pursue engineering as a career in the future.

“We are here to mentor these girls. And it is our belief that as they begin to imagine great careers in engineering and diligently demonstrate passion and with the right guidance, the sky will be their limit,” she noted.

Also speaking during the event, the Emir of Misau. Alh. Ahmed Suleiman (II), thanked APWEN for choosing some of Misau’s primary schools among the beneficiaries of their projects.

He charged parents in his community to assist their wards towards studying science, technology and engineering subjects, which he said were pivotal to the industrial development of any nation.