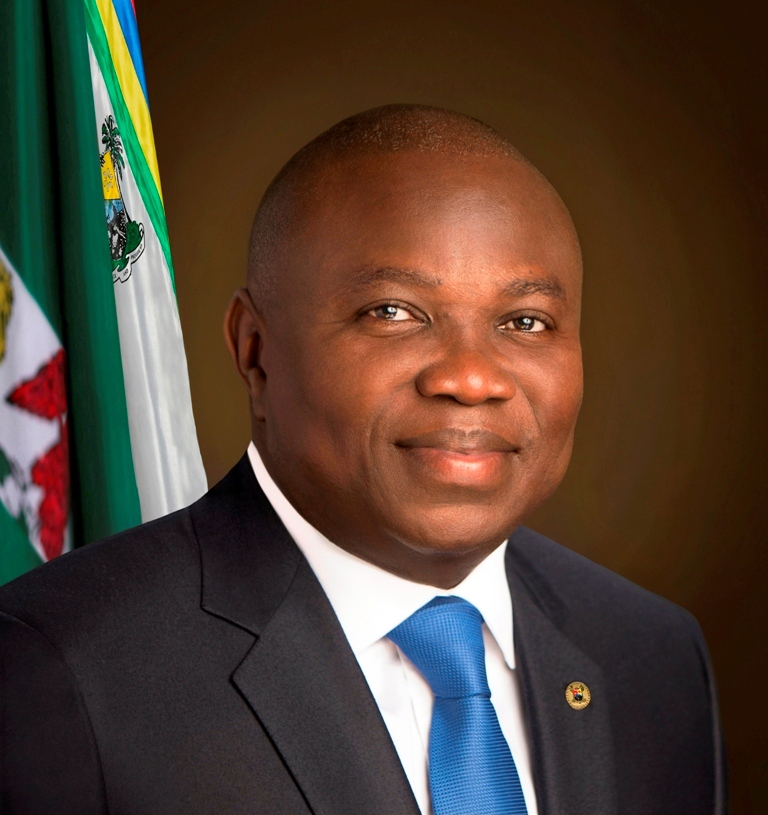 Mr. Akinwunmi Ambode is an accountant, an administrator and a public finance management expert. On April 11, 2015 he won a keenly contested gubernatorial election and was duly sworn in as the 14th Governor of Lagos State on May 29, 2015.

Governor Ambode is passionate about the Lagos project and looks poised to bring that passion to bear in the state in the next four years. In the last 16 months, his administration has initiated several projects that has not only improved the standard of living of residents, but has also made life more comfortable for the people.

Some of his administration’s initiatives such as the ‘Light Up Lagos’ Project, construction of Flyovers Bridges, Pedestrian Bridges, Laybys, massive road rehabilitation and construction, revamping of health sector, donations of multibillion naira security equipment, among others have placed the state on a pedestal of sustainable development for the future.

Mr. Ambode in September received the Best Performing Governor of the Year Award for his outstanding performances at the 2016 International Forum on African Leadership, organized by the African Leadership Magazine at the Regis Hotel, New York, USA, following the result of the Good Governance Poll conducted by the magazine to measure and gauge the performances of Nigerian Governors.

Needless to say, a prime test of democracy in developing nations is how to connect the government with the governed. It is, perhaps, in order to get round this challenge that Lagos State Governor, Mr. Akinwunmi Ambode, at his inauguration, pledged to run an all-inclusive government  in which  “no one or segment of the society, irrespective of colour, race, faith, status, ability or disability is left behind”. Thus far, the gains of this novel model of governance are quite enormous and cuts across programmes in all sectors.

The state government in fulfilment of its pledge to bequeath to Lagosians enduring roads to engender smooth motoring, faster turn-around and ensure reduction in man-hour loss to traffic gridlock, has so far committed N1.386 billion to construction and rehabilitation of roads.

With “Operation fix all potholes”, the state of over 450 roads across the State has been significantly improved.   Major roads have been fixed, while new road projects are regularly being executed.

Government equally mandated the 20 Local Government Areas and 37 Local Council Development Areas to embark on the construction of 114 roads across the State.

An historic 4th Mainland Bridge project, a 38 KM long four lane dual carriage way is underway in the State. A Memorandum of Understanding to set in motion the construction of the bridge under a Public Private Partnership (PPP) has been signed. The project will be financed by African Finance Cooperation, Access Bank and other private investors at the cost of N844 Billion.

The bridge will comprise eight interchanges to facilitate effective interconnectivity between different parts of the state. It would entail a four-lane dual carriage way with each comprising three lanes and two meters hard shoulder on each side.

The bridge is geared toward socio-economic growth of the State as it would provide the requisite transportation support to the rapidly developing Eti-Osa-Lekki – Epe Corridor of the State.

Three flyovers are also currently being constructed in densely populated areas of Abule –Egba, Ajah and Pen Cinema to ease traffic gridlocks being experienced in such places The flyovers would have solar-powered signalised intersection in order to improve traffic in the areas. Similarly, pedestrian bridges are being constructed across the State. The one along Lagos-Ibadan Express way at Ojodu Berger is nearing completion with inbuilt arrangement for physically challenged individuals.

Construction of second Ojota pedestrian bridge is also ongoing while many Laybys have been provided on major highways to ease traffic gridlock.

The Light up Lagos project which was conceived to light up major highways and streets in Lagos metropolis has being executed with vigour. The project was embarked upon to ensure safety of residents by providing guidance and direction across the metropolis, especially at nights, thereby stimulating night economy.

To creatively tackle unemployment, the administration set up a 25-billion-naira Employment Trust Fund. The scheme is hinged on a strategic plan to make an annual contribution of N6.25billion for four years which would be disbursed to youths with business ideas. To ensure the success of the fund and effective distribution to deserving individuals, a Board of Trustees comprising seasoned finance administrators from both public and private sector was set up for the management of the fund.

Similarly, a new Ministry, Wealth Creation and Employment was established to give identity to unemployed youths and also provide business support services for small businesses and entrepreneurs in the state.

As the commercial nerve centre of the country and indeed West Africa, Lagos has unusual security challenges. Its increasing population, driven by endless survival and economic inspired immigration, as well as its border with Benin Republic makes it naturally attractive to criminal activities.

Mindful of inherent danger that insecurity could pose to the advancement of the State, the Akinwunmi Ambode administration made upgrading of security mechanism in the state a top priority.

Consequently, the administration has fortified the Rapid Response Squad (RRS), in partnership with the state police command and other stakeholders to further enhance its operational capabilities.

Perhaps, the most audacious intervention by any state government in the country in public security was achieved with the donation of security equipment worth N4.7b to the State Police Command by Governor Ambode.

This is reflected in the handing over of 2 surveillance helicopters, 10 armoured tanks, 10 brand new Hilux vehicles and 115 power bikes to the Police Command and RRS.

Similarly a recent presentation of more security equipment was made to security agencies, including the Nigerian Navy, Army and Air Force.

Through diverse strategies, the administration has also given a boost to tourism in the state. One of such is the One Lagos Fiesta which was used to sign off Year 2015. Buoyed by the need to explore technology in boosting the state’s tourism potentials, the One Lagos website and Mobile application was developed to provide authentic Lagos content for tourists and Lagos residents.

The State government drive to make Lagos tourism destination of choice received a boost as its Love Lagos campaign was the cynosure of all eyes at this year Notting Carnival in London. The objective is to sensitise Nigerians in the Diaspora and lovers of Lagos State on the Brand Lagos.

The state was also invited as the First City in Africa to enjoy special mention and dedication at the 2016 Toronto Film festival held recently.

In its drive to attract investment and position the State economy on sound footing, the administration established an Office of Overseas Affairs and Investment (LAGOS GLOBAL). The office is tasked with the responsibility of creating an enabling environment for global competitiveness and promoting inward and outward foreign direct investments in the State. No fewer than 193 Investment proposals have been received through the Office, while some have enjoyed government approvals.

Also to make the Lagos economy a self-sustaining one, the tax net was widened to include more groups and individuals. This was done through the overhauling of the informal sector.

To properly leverage on sports as a platform for youth empowerment, the ‘Lagos City Marathon’ which attracted over 50,000 spectators and thousands of participants was organised.  Equally, in partnership with the state government, Barcelona Football Club of Spain has established the first ever Football Academy in Black Africa in Lagos.

The Ambode administration places high premium on law and Order as one of its cardinal programmes. Towards achieving this, the administration has recorded achievements in areas of Legislative initiatives, special task force on Land grabbers and signed landmark memorandum of understanding on various issues.

Dispensation of justice is also being boosted through several innovative reforms such is the introduction of mobile courts. The courts were inaugurated to try traffic and environmental offenders and mete out instant punishments.  The move is to decongest the courts and not add to inconclusive cases that have been in courts for years.

Other innovations in the judicial sector include the display of all Lagos State Laws online.  Plans are also underway to establish a DNA forensic centre which will be the first of its kind in the country.

To further bring healthcare services closer, the administration commissioned a newly constructed Helipad at Lagos State University teaching Hospital (LASUTH) to facilitate timely evacuation of patients in critical condition and aid movement of patients from remote areas where healthcare facilities to provide the level of emergency medicine required are not readily available.

To make Lagos State a key destination for medical tourism, the State government plans to establish a medical park where all medical services could be rendered thus preventing practice of seeking medical services abroad. This is in line with strategies to create better access to health services for the residents of the state.

Education and development of human capital have been identified as core area of focus by the Akinwunmi administration.

In this light, major rehabilitation of schools have been undertaken to improve teaching and learning.

Mass recruitment of teachers have also been undertaken within the past 15 months to field the gap in key subject areas that had been identified in public primary and secondary schools in the State.

The administration launched a programme tagged: ready-Set-Work, an entrepreneurship and employability initiative aimed at repositioning tertiary education in the state and adequately prepare products of the state’s tertiary institutions for the world of work. The programme is designed to solve the problem of unemployment of University graduates.

Also, a new educational policy initiative tagged 3600 Education Policy is being implemented to promote the growth of functional and qualitative education across the State.

In line with his promise of ensuring food security and putting more food on the table of all citizens of the state, the state government has evolved several programmes to improve the agriculture sector and facilitate steady food supply.

In this regard, the state government under the Ambode administration signed a memorandum of understanding with the Kebbi State Government on Rice production.

Following its conviction that true democracy thrives when the government supports the aspirations and yearnings of its people, the Ambode administration has in the past 15 months formulated policies and executed programmes that address this philosophy while more people oriented programmes and projects are still counting.