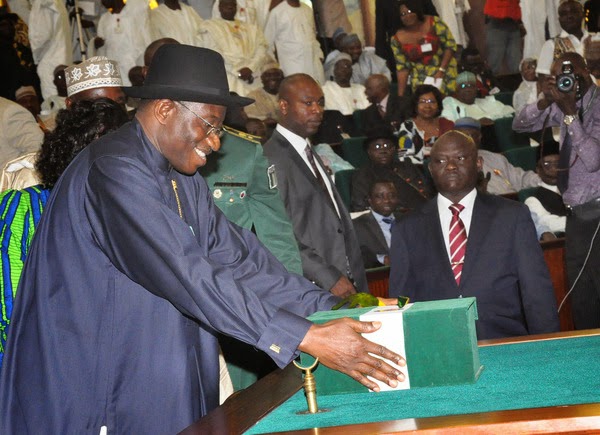 The coordinating minister for the economy and minister of finance, Dr Ngozi Okonjo-Iweala, yesterday refuted claims by the leadership of the Nigerian Army and other security agencies that poor funding was undermining ongoing war against terrorists, saying that the federal government was providing the needed funds to prosecute the war.

Okonjo-Iweala disclosed that the president had signed the 2014 Appropriation Bill several days ago, with a total aggregate expenditure (budget) provision of N4.964 trillion.

Briefing the media on the key provisions of the budget, the minister explained that despite the reported claims that the Boko Haram war was under-funded, government had supported and would continue to support the security agencies with funds, adding however that it is a well-known fact that funding of wars is never ever adequate globally, as the military and other agencies would always need new technologies and machinery to beef up their capacity.

“The defence spending has been treated expeditiously. There is no military establishment in the world that I know of engaged in a war that always has enough money. They would always need more equipment; this is a new type of war. They will always need things that can assist them; so we have to admit that the case of Nigeria is no different. No amount can be enough; so the comments you heard may be in that context,” she said. “In terms of the budget, the defence sector’s budget comes to almost one-quarter of the total budget. Specifically N968.128 billion. That is for all of defence including the army, navy, air force, security sector, the police, police formation, the interior which also includes the Civil Defence. This year, we have endeavoured to disburse moneys to them that they needed. As at now, from January to April, we have disbursed a N130.7 billion of which about N85.9bn is for personnel cost.

“They needed an extra N24.8 billion in additional budget in addition to their standard budget which we have given them. We are still processing N3.8 billion that have been approved by Mr President. So I think that, all in all, we have endeavoured to process their financial requirement expeditiously, though sometimes requirements come for different joint task forces, special operations — and these funds are to come from Mr President’s contingency or else, and we have had to scramble. We are in touch with them and I think we really need to be supportive of them.”

This is even as official reports had it yesterday that budgets of about 52 ministries, departments and agencies (MDAs) were still being tinkered with at the hallowed chambers of the National Assembly, after nearly six months.

“We received the signed budget from Mr President this morning. And it was signed a couple of days ago. I just got back this morning and he handed it over to the DG Budget and I.”

She stressed that the delay in passing the budget did not affect the running of the economy.

“Even though the budget was signed just a few days ago, the delayed timing has not hampered the running of the economy because of what we have in section 82 of the constitution, which enabled us to continue the implementation based on last year’s budget where we can continue spending up to 50 per cent. So we have been able to continue running the country as a result of that. So the effect of the delayed passage has been relatively minimal. The impact of the delayed passing has been minimal; we have paid salaries, overheads, debt service as at when due. We also released N200 billion capital for the first quarter and, very soon, we will release capital for the second quarter, probably next month.”

Okonjo-Iweala disclosed that the focus of the aggregate budget, of which capital provisions stood at about N1.287 billion, revolved round fiscal policy measures that were aimed at supporting investments in key sectors of the economy with huge potential for job creation and poverty alleviation.

She said the sectors, which include agriculture, aviation, education and solid minerals, were prioritised in the area of fiscal incentives, including zero duty on all imported equipment that are targeted at boosting productivity and capacity building such that the broad policy targets of the budget, namely, job creation and inclusive growth are achieved.