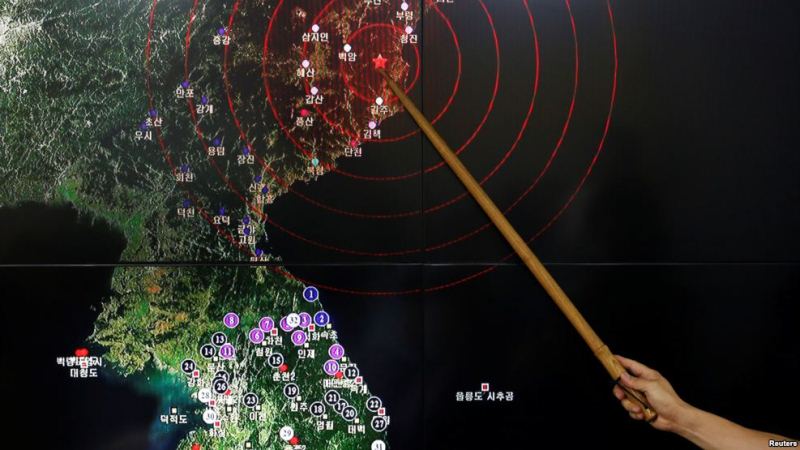 North Korea has confirmed that a 5.3-magnitude artificial earthquake that occurred Friday morning near its Punggye-ri nuclear test site was caused by a nuclear test.

U.S. Geological Survey and European agencies detected the quake Friday at 9:30 a.m. local time. The China Earthquake Networks Center said the quake was due to a suspected explosion.

An announcer with North Korean state television KCNA read a statement from the Nuclear Weapon Research Institute of the DPRK confirming a successful nuclear test was conducted to assess the capacity of a nuclear warhead that can now be miniaturized to fit on various types of missiles.

“This nuclear warhead explosion test is part of responsive measures to threats and sanctions from the U.S. and enemies denying our strategic position as a nuclear state,” The KCNA announcer said during the broadcast.

Pyongyang did not advise the international community in advance of its plans to conduct a nuclear test.

September 9 marks the 68th anniversary of the founding of North Korea and Pyongyang has in the past marked important holidays by conducting nuclear and missile tests.

President Park, who is in Laos for the ASEAN security summit said this nuclear provocation,” proves Kim Jong Un’s rabid recklessness to cling to nuclear development.”

The South Korean president will leave the ASEAN summit early and return to Seoul to monitor the situation.

“We are facing a grave situation which is totally different from the past when North Korea conducted nuclear tests once in three years. North Korea’s nuclear and missile threats are clear and existential,” said Hwang.

Japanese Prime Minister Shinzo Abe said if a nuclear test is confirmed, it would be “something absolutely inadmissible” and that Tokyo would call for action from the U.N. Security Council.

“Japan is currently a member of the U.N. Security Council, so we will also work closely with New York, if this nuclear test was indeed carried out, to figure out how best to react to this situation,” Abe said.

The White House released a statement reiterating President Barack Obama’s “unbreakable” commitment to allies in Asia and the world, and said the president will consult with other leaders to make sure North Korea’s provocations are met with “serious consequences.”

China’s official Xinhua news agency urged all parties in the international community to exercise restraint following North Korea’s latest nuclear test, saying that it is in nobody’s interest for there to be chaos or war on the Korean peninsula.

North Koreans watch a news report regarding a nuclear test on a large screen outside the Pyongyang Station in Pyongyang, North Korea, Friday, Sept. 9, 2016.

North Korea conducted its fourth nuclear test in January, causing a 5.1 magnitude earthquake. Pyongyang said it tested a hydrogen bomb, which is much more powerful than past atomic bomb blasts.

Analysts, however, said the January blast was not big enough to be a full thermonuclear explosion or “H-bomb.”

South Korea’s meteorological agency said Friday’s test produced a 10-kiloton blast, nearly twice the power of the January nuclear test but slightly less than the Hiroshima bombing, which was measured about 15 kilotons.

Jeffrey Lewis with the California-based Middlebury Institute of International Studies told Reuters that an earthquake of this magnitude would indicate a device with a 20- to 30-kiloton yield, which would be the largest yield estimate yet of a North Korean nuclear device.

The United Nations in March imposed harsh new sanctions on North Korea for its continued and defiant violations of Security Council resolutions banning the country’s development of nuclear weapons and ballistic missiles.

Since the latest round of sanctions were imposed, Pyongyang has conducted 20 tests of short- and medium-range missiles, including submarine based launches, advancing its capability to reach the U.S. mainland with a nuclear strike.

The last missile test occurred during the G-20 summit of the world’s largest economies that took place in China and included the U.S., South Korea, Japan and Russia.

While the U.N. Security Council recently denounced North Korea’s repeated missile tests, it has not imposed any further sanctions.

Chinese officials have said they don’t want to impose crippling sanctions that could cause the collapse of the Kim Jong Un government, spark instability at the Sino, North Korea border and increase U.S. power and influence on the Korean peninsula.

A Terminal High Altitude Area Defense (THAAD) interceptor is launched during a successful intercept test, in this undated handout photo provided by the U.S. Department of Defense, Missile Defense Agency.

Last year, the U.S.-Korea Institute at the Johns Hopkins School of Advanced International Studies (SAIS) estimated that North Korea has enough plutonium and highly enriched uranium to build 10-16 nuclear devices and the nuclear fuel cycle capability to replenish and increase its nuclear stockpile.

North Korea has claimed it has successfully miniaturized a nuclear warhead to fit on the head of missile. While this claim has not yet been demonstrated, U.S. and South Korean military officials say they are developing defensive strategies based on the assumption that the North does possess this offensive nuclear capability.

The U.N. sanctions along with new unilateral measures from the United States, South Korea and other countries imposed in response to Pyongyang’s previous nuclear test and rocket launch this year have the potential to impose real economic pain over time.

International sanctions include suspending currency transfers and restricting the North’s lucrative mineral trade that had accounted for over half of the country’s $2.5 billion in exports to China alone.

South Korea cut all remaining ties with the North that includes closing the jointly run Kaesong Industrial Complex that employed over 54,000 North Koreans.

Beijing’s cooperation to enforce these international sanctions is considered crucial because 90 percent of North Korean trade flows either to or through China.

There have been reports that China has been lenient in enforcing the U.N. restrictions.

The U.N. ban on North Korean mineral exports includes a difficult to verify humanitarian exemption for coal and iron exports, as long as the profits are not used to fund the development of nuclear weapons or other illicit arms.

Washington also imposed unilateral sanctions that could also target Chinese and other international companies involved using North Korean labor abroad, which has become a lucrative source of income for the Kim government. The U.S. treasury is also authorized to seize the financial assets of any individuals or organizations involved in illicit activities with North Korea.

After North Korea’s nuclear test in January, the U.S. brought in a B-52 long range bomber, capable of delivering nuclear weapons, and other fighter aircraft to conduct low level flights near the inter-Korean border.

South Korea and the United States are also moving forward to deploy the THAAD missile defense system on the Korean peninsula.

Chinese officials have objected to placing THAAD in the region, saying the system’s radar has the capability to spy into its territory.