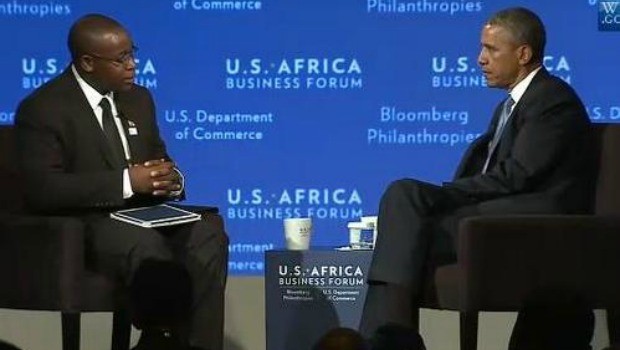 President Obama’s Advisory Council on Doing Business in Africa met for the first time in Washington, D.C. on Wednesday, April 8. High-level U.S. government officials, including National Security Advisor Susan Rice and Secretary of Commerce Penny Pritzker, attended the session, along with the council’s 15 private sector members, who represent some of the largest U.S. companies currently doing business in Africa. The council’s meeting marked the fulfillment of a key commitment from last year’s U.S. Africa Leaders Summit, where President Obama instructed the Commerce Department to establish a private sector-led working group with the goal of developing a comprehensive set of recommendations to enhance U.S.-African trade and investment. The council’sRecommendations Report was also released on Wednesday and includes several innovative proposals. For example, members of the infrastructure subcommittee, led by GE Africa’s CEO Jay Ireland, recommended the establishment of a “forward-deployed” U.S.-Africa Infrastructure Center that would ensure early American involvement in “target markets” through advocacy, information sharing, and participation in feasibility studies. The report also highlights the development of African capital markets as a critical feature of attracting increased investment, and recommends that the U.S. Security and Exchange Commission provide technical assistance on “market development, surveillance, and enforcement issues” in the region. Outside of recommendations to the U.S. government, council members also committed to independent efforts to support American commerce in the region, including theannouncement by Peter T. Grauer, chairmen of Bloomberg LP, that his company would host a business and economic summit in Africa in early 2016, following up on its similar forum, convened last year in collaboration with the Commerce Department.

Following last week’s attack on the Garissa University campus in northeastern Kenya that left 148 people dead, the Kenyan military bombed al-Shabab camps in Somalia on Monday, April 6. Despite these actions, the Kenyan government remains at the center of public criticism for its slow response to the attack and the seven-hour delay between the time the authorities became aware of the assault and the time police forces arrived on the scene. On Tuesday,demonstrations were held in the capital over growing concerns about the country’s state of security. Kenyan students took to the streets chanting, “We are not safe!” and arguing that the country suffers from a flawed security system, plagued by insufficient funding and high levels of corruption. At a press conference held by State House Spokesperson Manoah Esipisu, the Kenyan government admitted there were shortcomings in the nation’s response to the massacre and that more help is needed from the international community to tackle al-Shabab.

On Wednesday, the Kenyan government locked the bank accounts of 86 individuals and firms allegedly linked to al-Shabab in order to sever possible funding sources of the terrorist organization. The government also ordered the closure of 13 remittance firms, known as “hawalas,” which are predominantly used to transfer funds to Somalia. These informal money transfer firms are heavily relied upon by Somalis, as the banking sector is extremely limited in their country. This decision is expected to have devastating effects on Kenya’s Somali community and was denounced by hawala users as financially damaging.

President-Elect Buhari announces plans for his administration as challenges mount

Nigerian President-Elect Muhammadu Buhari released a public letter to the Nigerian people last week, describing a series of commitments for his first 100 days in office. In the letter, Buhari, set to be inaugurated on May 29, pledged to revive the country’s economy, deal with strictly with Nigeria’s endemic corruption, and develop a “Marshal Plan on insurgency, terrorism, ethnic and religious violence, kidnapping, rural banditry,” among other promises. President-Elect Buhari further elaborated on these commitments in remarks this week, vowing to personally address government fraud and support the nation’s educational system. The strong rhetoric, however, has failed to fully assuage concerns on the part of many Nigerians about the Buhari’s authoritarian past or his abilities to support a renewed sense of national unity. Despite recent success in the fight against the militant group Boko Haram, violent attacks occurred over the weekend in the country’s southern Niger Delta states, a region seen to be politically aligned with Buhari’s opponent in the March elections, President Goodluck Jonathan.