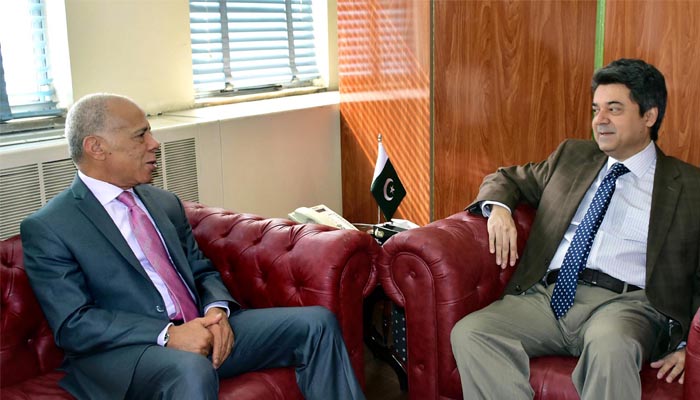 The minister made the demand while speaking to Morocco ambassador in Islamabad Mohamed Karmoune who called on the Federal Minister for Law and Justice Barrister Dr. Muhammad Farogh Naseem at his office on Tuesday.

The ambassador expressed his gratitude and said his tenure in Pakistan has been an amazing learning experience.

Pakistan has stood with Morocco since 1952 and the friendly brotherly relations between the two countries are flourishing ever since.

Mr. Mohamed Karmoune expressed his desire to take the relations between the two countries, in the fields of trade and economy even further at the next level of cooperation.

He was of the view that since two countries have a bond of common faith, we can exchange and share our cultural experiences. He said both countries can go for joint ventures of different nature similar to the one between Fauji Foundation and OCP, a Moroccan government entity.

The minister told the ambassador that Pakistanis have a great sense of affinity with Morocco.

“The peoples of both countries have a comfortable relationship with and support for each other. Morocco is a beautiful tourist destination and the Pakistani people love Moroccan cuisine and prefer Morocco when it comes to vacations over a number of other countries.”

He also invited the King and Prime Minister of Morocco to visit Pakistan.

Dr. Farogh Naseem told the Moroccan Ambassador the Pakistani side would welcome investment in architecture, textile, education and culture to which the ambassador positively responded, saying that Morocco has offered scholarships to Pakistani students.

Pakistani students who wish to study in Morocco are also encouraged to learn French, he said.

He also raised the issue of difficulty in obtaining Moroccan visas, which the Pakistani businessmen and genuine applicants often face.

The ambassador assured the Federal Minister, following the background checks, the visas would be issued to the genuine visa applicants on the very same day. He reiterated that the Pakistani businessmen were welcome in Morocco and they would be facilitated in every possible way.