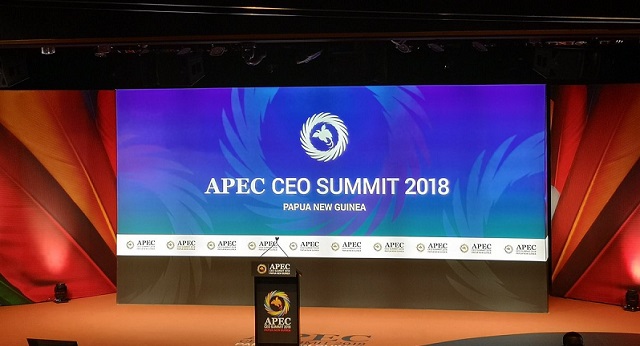 The thematic agenda for this period focused on improving connectivity and regional economic integration by advancing the so-called Bogor Goals, which seek to achieve trade and investment liberalization and facilitation by developing economies in the bloc by 2020.

It also influences the promotion of sustainable and inclusive growth; and progress in strengthening the APEC structural reform agenda.

This Oceania nation occupies the eastern half of the island of New Guinea; the other half is part of the state of Western New Guinea.

It is located north of Australia, west of the Solomon Islands and southwest of the Pacific Ocean, in a region defined since the early nineteenth century as Melanesia and is the only country in Oceania to have a land border (Indonesia).

Due to its location in the Pacific ring of fire, where various tectonic plates collide, several active volcanoes are noticeable, frequent earthquakes sometimes accompanied by tsunamis.

It is one of the countries with the greatest cultural diversity in the world, with its 462,840 square kilometers and only 7 million inhabitants.

It has more than a thousand different ethnic groups with their own customs, beliefs and traditions maintained over the centuries.

There are a large number of people who live in the traditional way as their ancestors did in the rural areas of this country.

Over 800 indigenous languages are spoken in the Papuan territory, representing more than 10 percent of these languages worldwide, and Tok Pisin and Hiri Motu are the most widely used in the country. Both are considered official along with English, although the latter is not spoken by many people.

The territory is organized into 22 provinces and Port Moresby, the capital, which is the most populous city.