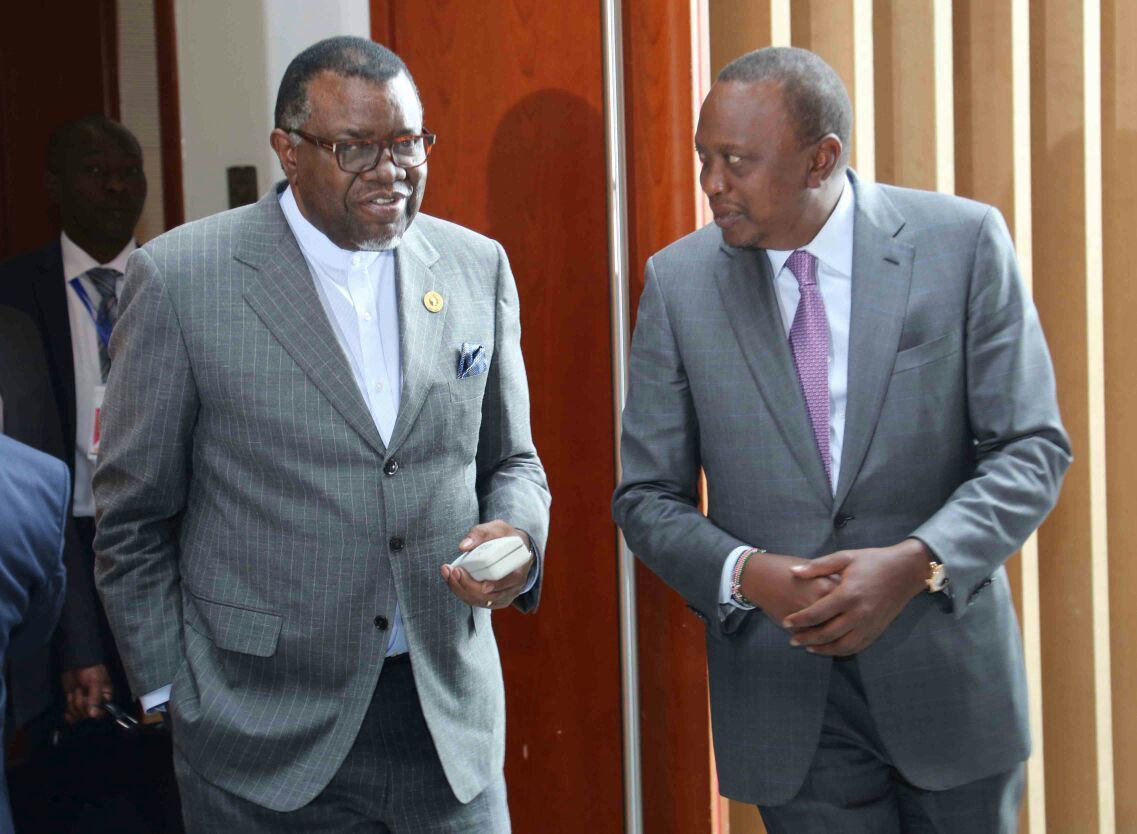 President Hage Geingob of Namibia has arrived in the country ahead of bilateral talks with President Uhuru Kenyatta on Friday.

The Namibian leader is expected to grace this year’s Mashujaa Day celebrations to be held in Kakamega on Saturday.

Geingob and Kenyatta will lead their respective delegations for bilateral talks at State House Nairobi Friday morning before holding a joint media briefing.

Cooperation between Kenya and Namibia in the areas of trade, agriculture, and health has been earmarked as the central agenda for the bilateral meeting which comes a day after Foreign Affairs Cabinet Secretary Monica Juma and her Namibian counterpart Netumbo Nandi-Ndaitwah inaugurated a ministerial session for the recently launched Joint Commission for Cooperation (JCC) for the two nations.

On Monday, Foreign Affairs Principal Secretary Macharia Kamau inaugurated a meeting of senior officials of both Kenya and Namibia as the first session of the JCC kicked off.

In his remarks at the session, Kamau urged the officials to identify sectors where the two nations could cooperate in order to leverage on comparative advantages.

He said the commission will focus on key tenets of the collaboration agreement between Kenya and Namibia with clear timelines for the implementation of the commission’s agenda.

In her remarks during the Monday session, Namibian Permanent Secretary for International Relations Selma Ashipala-Musavyi said her country was committed to deepening existing ties with Kenya for the benefit of the two nations.

Ashipala-Musavyi noted that relations between the two nations dated back to pre-independence when Kenya assisted Namibia in her liberation struggle.

“It is this rich history that laid the strong foundation of the diplomatic relations and bilateral cooperation between our two countries,” she observed.

Kenya has been a key partner to Namibia especially in the health sector with the expat Kenyan community in the nation located on the southwest of Africa projected at 500 in 2010.

Kenya helped Namibia meet a personnel deficit at her health centres in 2002.

Kenya-Namibia relations have been reinvigorated in the recent past, the two nations working closely on key regional and continental agendas including the African Continental Free Trade Area Agreement (AfCFTA) which has been signed by both nations.

During a recent visit to Namibia, CS Juma commended the country for joining close to fifty African States that had signed to the trade agreement brokered during an African Union summit in Kigali, Rwanda, in March.

“This is a clear indication of resolute political goodwill for a more integrated Africa. We encourage Namibia to follow through with the ratification process so as to realize the African vision that is integrated, strong, united and influential global players and partners,” she said during her visit to Windhoek in July.

Other areas of cooperation being explored include education, defence, health, and tourism.