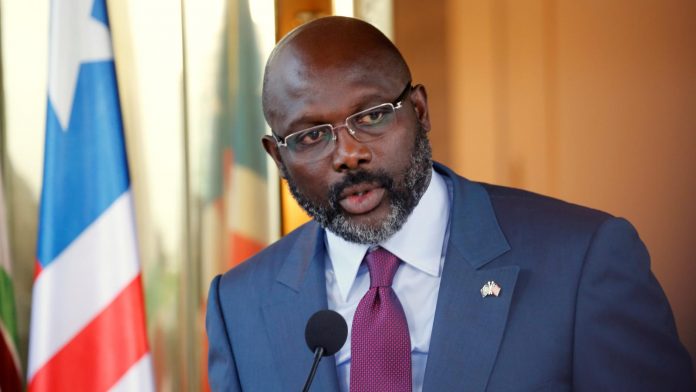 As a professional footballer, he achieved several feats and is not new to firsts as he was the first and the only African footballer that has been named FIFA World Player of the Year. He never let obstacles wear him down and bringing the same energy, enthusiasm and dedication while venturing into politics. In 2005 during the presidential election run-off that saw Her Excellency Ellen Johnson Sirleaf, Former President of Liberia elected as President, Weah was referred to as a “babe-in-the-woods” due to is supposed lack of experience and qualifications at the time.

Focused, determined, and dedicated as always, George Weah, who now serves as the 25th President of the Republic of Liberia, went on to pursue a degree in business administration at DeVry University in Miami. Armed with which he returned to Liberia in 2009 to successfully campaign for the Congress for Democratic Change candidate in the Montserrado County senatorial by-election.

In 2014, he ran for election to the Senate as a Congress for Democratic Change candidate in Montserrado County and was overwhelmingly elected to the Liberian Senate on December 20th 2014.  In April 2016, Weah announced his intention to run for President of Liberia in the 2017 elections, standing for the Coalition for Democratic Change. He emerged successful in the first round of the 2017 election. He was elected President of Liberia, winning a run-off against Vice President Joseph Boakai with more than 60% of the vote.

Weah was sworn in as President on January 22nd 2018, making him the fourth youngest-serving President in Africa, marking Liberia’s first democratic transition in 74 years. He cited fighting Corruption, reforming the economy, combating illiteracy and improving living conditions as the main targets of his presidency.

Since assuming the office the President in 2018, His Excellency George Weah has continued to work relentlessly towards achieving his targets of socio-economic development in the country. He has remained focused on his charge to ensure that peace prevails in Liberia,

He initiated the “Pro-Poor Agenda for Prosperity and Development (PAPD)”, intended to serve as a compass for reconstruction, development, and modernization in Liberia, giving priority to poverty reduction. The PAPD is also intended to support the efforts of middle and upper-income Liberians to grow and prosper.

Also, recognizing infrastructure deficits as one of Liberia’s major developmental challenges, President Weah initiated projects to connect the county capitals by paved roads within his first five months in office. He has continued in his strides towards economic development.

At the appearance of the COVID19 pandemic in early 2020, while mitigating the economic impact of the pandemic, President Weah has also gone ahead to firmly address the alarming epidemic which has risen within the pandemic, in the form of Rape, Sexual and Gender-based Violence. These cases have disturbingly increased across various countries in the wake of the pandemic, especially against young women and girls. In response to the epidemic within the pandemic, President Weah recently convened a National Conference involving all Sexual and Gender-based Violence stakeholders, which resulted in the validation of a comprehensive roadmap intended to mitigate the incidence of this menace in our society. Based on the recommendations that emanated from the roadmap, his Government has declared rape as a National Emergency, appointed a Special Prosecutor for rape, set up a Sex Offenders Registry, and established a National Security Task Force on Sexual and Gender-Based Violence.

In September 2020, he launched some government projects to fight Corruption which is seen as a significant problem not just in Liberia but across Africa.

President Weah also developed innovative ways to reach out to the Liberian people about the coronavirus, through music. In March 2020, he recorded a song with a Liberian music group – The Rabbi’s, the text of which was written by himself—inviting the Liberian and African population to stand up by all means against this virus which is causing damage around the world.

President Weah is also a devoted humanitarian for his country Liberia. During his professional football career, he became a UN Goodwill Ambassador. At the 2004 ESPY Awards at the Kodak Theatre, Los Angeles, Weah won the Arthur Ashe Courage Award for his efforts. He has also been named a UNICEF Goodwill Ambassador, a role which he has suspended in his political career. Off the football pitch, he stood out throughout his career for his initiatives to fight against racism in the game.

He has also tried to use football as a way to bring happiness and promote education for children in Liberia. In 1998, Weah launched a CD called Lively Up Africa featuring the singer Frisbie Omo Isibor and eight other African football stars. The proceeds from this CD went to children’s programmes in the countries of origin of the athletes involved.

President Weah also served as President of the Junior Professionals, a former football team he founded in Monrovia in 1994. As a way to encourage young people to remain in school, the club’s only requirement for membership was school attendance. Many of the young people, recruited from all over Liberia, went on to play for the Liberian national team. He was also actively involved with youth programs in a Liberian enclave on Staten Island, New York when he resided there for a time.

President Weah turned 54 on October 1st and remains dedicated to his cause of seeing a Liberia free of Corruption, economically developed, with a literate population, and improved socio-economic development.