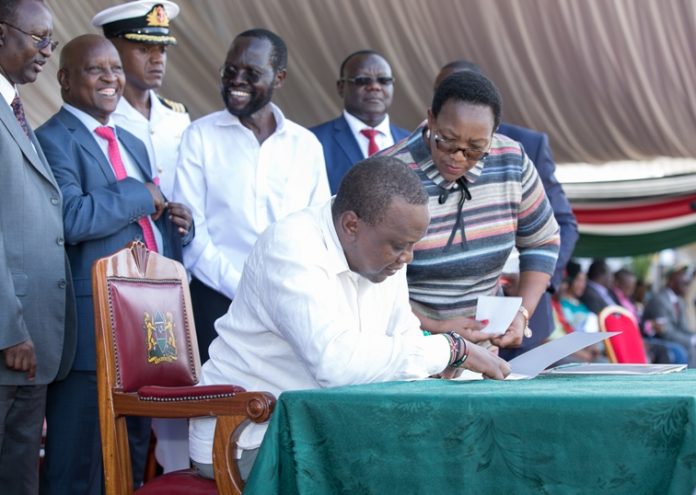 Kenya’s President Uhuru Kenyatta on Thursday kicked off his two-day working visit of Kisumu and Siaya Counties with calls for peace and national unity.

The President, accompanied by Deputy President William Ruto, former Prime Minister Raila Odinga who is also the AU envoy for Infrastructure and former Vice President Kalonzo Musyoka, began his visit by launching the construction of the Shs 655.9 million Ahero Interchange.

Addressing a huge crowd of jubilant residents during the launch at the Ahero-Kisii junction that gave him a rousing welcome after the historic March 2018 “handshake”, President Kenyatta said political competition will never again be allowed to undermine national unity.

“We are here to prove wrong those who are saying the ‘handshake’ is not genuine. The ‘handshake’ is working and our responsibility, as leaders, is to unite Kenyans so as to develop the country,” President Kenyatta said.

President Kenyatta pointed out that the new road project implemented in the county linking Nyanza, Western and Rift regions symbolized the new national spirit of unity and ushered in a new chapter of development in the country.

He said the road was a uniting factor for the people of Kisumu, Kisii, Kericho and Migori counties and as far as Tanzania.

The President added: “With my brother Raila, we’ve agreed that politics is not more important than the welfare of the people of the Republic of Kenya.”

The President said with the ‘handshake’, the country’s leadership has resolved that never again will politics be allowed to divide Kenyans.

“Our responsibility, as leaders, is to work together and ensure that after a grueling political competition, nobody is left out of Government. That is why my brother Raila Amolo Odinga is in Government and we are in close consultation on how to improve the lives of all Kenyans,” President Kenyatta said.

The Head of State emphasized that his visit to the lake county of Kisumu was to launch development projects but also to prove that the “handshake” was working to unite Kenyans, entrench peace and spread development across the country.

He urged Kenyans to support the journey of preaching peace and unity that leaders have embarked on, saying the spirit of ‘handshake’ will not stop in Kenya but spread to the whole of East Africa and across the African continent.

The President said that was the reason why the African Union gave the responsibility of developing the road infrastructure in Africa to former Prime Minister Odinga because of his experience and competence.

President Kenyatta also talked against corruption saying the war on graft should not be politicized.

“I urged all Kenyans to join hands in ending this vice that is threatening our economic development and growth. This vice knows no tribe, religion or political affiliation,” President Kenyatta said.

Deputy President Ruto said the entire Kenyan leadership is now united to develop the country and improve the lives of Kenyans.

The DP emphasized that the old political rivalry has been buried and a new chapter of peace and unity among leaders and wananchi has been opened courtesy of the ‘handshake’ between President Kenyatta and Mr Odinga.

“If you see President Uhuru Kenyatta, Hon. Raila Odinga and myself together, know that everything is well. We have all agreed to walk together on a journey of uniting Kenyans on the basis of the handshake of peace and development in Kenya,” said the Deputy President.

Former Prime Minister Odinga said his visit to Kisumu County with President Kenyatta is to take the spirit of the handshake to the grassroots.

The former Prime Minister said that after a grueling General Election last year, he agreed with the President to take steps to restore the unity that existed in Kenya during the early days of independence.

“We have come to prove that the handshake is working,” the former Prime Minister said and echoed President Kenyatta’s call for unity in development and in the fight against corruption.

From Ahero, the President and his entourage made stop overs at Rabuor, Molem, Nyamasaria and Kondele where he to acknowledged greetings and addressed thousands of enthusiastic wananchi who came out to receive him on his way to Victory SDA Church where he presented cheques to women and youth groups from the affirmative action funds.

President Kenyatta said the presentation of the cheques was part of his government’s efforts to empower women and the youth across the country.