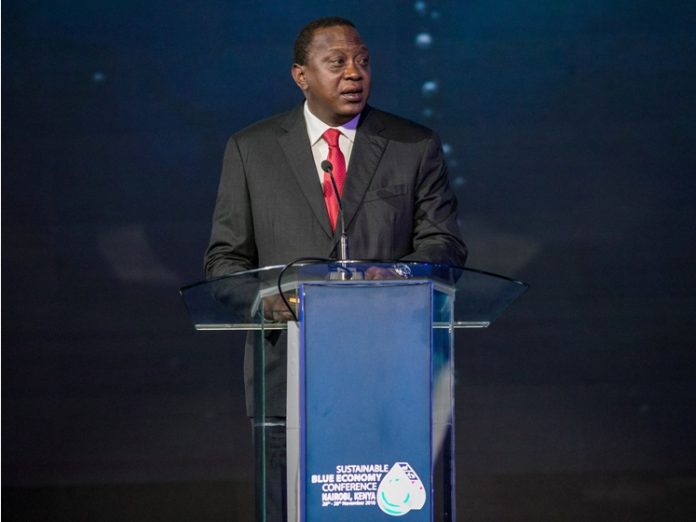 Kenya’s President Uhuru Kenyatta has pledged Kenya’s support for the sustainable blue economy by highlighting key areas of focus as the first ever global blue economy conference opened in Nairobi.

The President said Kenya will lead from the front in the adoption of appropriate policies, strategies and mechanisms to harness the blue economy so as to re-energize national economies and create greater opportunities and jobs.

“I am convinced that for the sake of the present and future generations, and for the continued viability of our ecosystems, we have to envision a different future and, therefore, a different model for the blue economy. I pledge to envision that future and do my part to promote it,” President Kenyatta said.

President Kenyatta was speaking when he led global leaders in making pledges and commitments to the blue economy at the historic conference, co-hosted by Kenya, Canada and Japan, that was also attended by senior Kenya Government officials including Deputy President William Ruto.

The three-day gathering seeks to harness the promise and address the vulnerabilities of the blue economy.

President Kenyatta emphasized the need to confront the challenge of waste management and plastic pollution that is compromising the health of people and oceans, seas and rivers as well as threatening food security and the biodiversity on land and at sea.

President Kenyatta underscored the need to ensure responsible and sustainable fishing to conserve the endangered species and high-value fish stocks, on which millions of people depend for their livelihoods.

The President expressed the need to ensure safety and security in the high seas so that global trade, connectivity and all businesses can thrive unhindered and unfettered.

As a move towards boosting the blue economy, President Kenyatta said his Government is taking steps to build on and expand institutional governance mechanisms that are already in place to enhance coordinated management of the blue economy.

“These include the Blue Economy Implementation Standing Committee as well as State Departments for fisheries and maritime logistics and transport,” President Kenyatta said.

The Kenyan leader said his administration is taking measures to revive Kenya’s maritime transport by building and expanding its ports and shipping facilities and partnering with global shipping lines to extend its maritime reach.

“We are enhancing our capabilities for Kenya seafarers to work on ships across the vast oceans by, inter alia, upgrading the Kenya Maritime School,” President Kenyatta said.

“We have adopted a programme to accelerate the development of our fisheries, by increasing aquaculture, fish processing and storage capacities and related blue economy industries, thereby creating employment opportunities for our people,” he added.

As part of Kenya’s efforts to revamp its blue economy, President Kenyatta last week commissioned the Liwatoni fisheries complex and jetty in Mombasa to enable docking of large fishing and patrol vessels and announced the establishment of a fishing Corporation.

Kenya has also already ratified the Port State Measures Agreement that will ensure vessels flying the Kenyan flag comply with measures contained in that Agreement.

President Kenyatta last week launched the Kenya Coast Guard Service to police Kenya’s territorial waters and resources as well as ensure that the nation fully benefits from its water resources.

“We are aggressively combating illegal, unregulated and unreported fishing, and have taken measures to enhance security and safety of our collective waters,” President Kenyatta said.

The President cited the ban of single-use plastics and the adoption of a housing programme to provide decent and affordable housing in the coastal cities as part of a broad programme for greening Kenya’s cities.

“We shall further re-develop lakefront cities and towns and release their great touristic and sustainable industrial potential,” President Kenyatta said.

President Kenyatta called for the world to work together to secure success in managing the global aquatic resources for sustainable global development.

Other Heads of State and Government at the conference who included, President Yoweri Museveni (Uganda), Filipe Nyusi (Mozambique), Abdullahi Mohamed (Somalia), Dr. Ali Mohammed Shein (Zanzibar) and Danny Faure of Seychelles committed themselves to the preservation and protection of the marine resources saying if well harnessed, marine resources could contribute more than double the current global economy.

Over 18,000 participants from around the world are attending the global conference in which delegates are expected to come up with strategies to harness the potential of Oceans, Seas, Lakes and Rivers to improve the lives of all, particularly people in developing states.

The delegates will also learn how to leverage the latest innovations, scientific advances and best practices to build prosperity while conserving waters for future generations.

President Uhuru Kenyatta, the host, while presenting his country’s commitment said that the Kenyan government has embarked on a plan to conserve water bodies by combating illegal fishing and ensuring security on water, banned single-use plastics and provided funds for improved water conservation, among others.

He called for a combined effort from all members in the preservation of the world’s water bodies.

“Unless our environmental resources are conserved, there will be no survivor on earth. Success in the management of our aquatic resources hinges on us working together,’’ he said.

The President of Seychelles, Danny Faure, currently the champion for Blue Economy in Africa, said that good governance and transparency are key in realizing a sustainable blue economy.

The conference will, among other things, identify ways of harnessing the potential of the water bodies to create jobs and combat poverty and hunger; show how economic development and healthy waters go hand in hand as well as capture commitments and practical actions that can be taken for positive changes. In addition, it will bring together the players needed to transition to a blue economy.

It will also endeavor to leverage the latest innovations, scientific advances and best practices to build prosperity while conserving the waters for future generations.

Several African leaders and government representatives as well as representatives from International Organisations like the United Nation and the African Union also delivered messages of commitment.

The Sustainable Blue Economy Conference builds on the momentum of the UN’s 2030 Agenda for Sustainable Development, the 2015 Climate Change Conference in Paris and the UN Ocean Conference 2017 “Call to Action”.