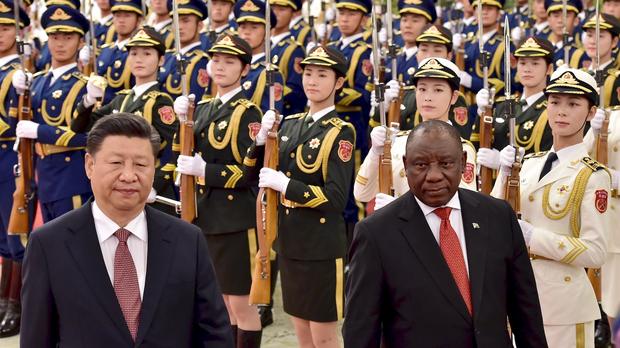 Your Excellency Xi Jinping, President of the People’s Republic of China,

Your Excellency Paul Kagame, Chairperson of the African Union and President of Rwanda,

Your Excellency António Guterres, Secretary-General of the United Nations,

Honourable Heads of State and Government,

China is an old friend of Africa.

It has a long history of engagement, friendship and support.

Allow me to express my appreciation to you, President Xi Jinping, and to the people and government of the People’s Republic of China, for the outstanding hospitality and excellent facilities provided to our delegation since our arrival in the beautiful city of Beijing.

We are humbled that the first visit you undertook after your re-election to the esteemed position of General Secretary of the Central Committee of the Communist Party of China was to Africa.

Furthermore, a tradition has been established for the past 26 years in Chinese diplomacy that your Foreign Minister prioritises us in Africa as the destination of his first foreign visit.

We thank State Councillor and Minister Wang Yi for upholding this practice.

President Xi, this is not only indicative of the close relations between Africa and China but also of your personal affinity for the Continent.

Allow me to also commend you for the great progress that the Forum on China-Africa Cooperation has made since its inception in 2000.

The 3rd FOCAC Summit reflects the unique and strategic nature of our partnership that facilitates the realisation of Africa’s developmental aspirations reflected in Agenda 2063 through pragmatic collaboration in the quest of win-win cooperation.

The outcomes of the Johannesburg Summit in 2015 – including the Action Plan 2016-2018 and the ten new cooperation measures announced by you, President Xi – are indeed welcomed by all.

The measures are directly aligned with Africa’s priorities, including the need for infrastructure development, funding and professional skilled personnel.

Soon after Africa cast off the shackles of colonialism and imperialism, the Chinese government developed the Tanzania, Zambia and Mombasa Railways that were for a long time a symbol of political emancipation and South-South Cooperation.

As we now pursue our economic liberation and socio-economic development of our peoples, I am convinced that FOCAC has taken the comprehensive strategic partnership journey further.

In the past three years, China has provided $60 billion to carry out some of the Africa’s largest infrastructure development projects.

These are all either completed or under construction.

Our coastal areas are not being neglected either as China extends its cooperation expansion projects in Port Lamu, Nigeria’s Laki Deep-Water Port and the Port of Dar es Salaam.

We are impressed with the number of economic and trade zones that FOCAC can claim credit for.

South Africa and China have cooperated within the BRICS family to drive development by the establishment of the BRICS New Development Bank based in China and the Africa Regional Centre based in South Africa.

Our human susceptibility makes us vulnerable to natural catastrophe.

However, our common humanity compels us to assist each other.

In the wake of the contagious Ebola epidemic that claimed thousands of lives in West Africa, when many other countries were shying away from this crisis, China characteristically responded by dispatching 1,000 medical professionals and medical aid worth $120 million.

The FOCAC Framework accommodates China’s cooperation in Africa’s Peace and Security Architecture, established in 2004 to address conflict and instability.

China has nearly 3,000 troops, police and observers engaged in 6 of the 7 UN peace-keeping operations on our Continent.

Chinese diplomats have worked tirelessly in brokering peace in Sudan.

China contributed to transforming the untenable condition of “no peace no war” between Eritrea and Ethiopia into one of friendship and good neighbourliness.

As South Africa assumes its non-permanent seat on the UN Security Council, I have instructed our diplomats to honour this practice.

We look forward to continued Chinese support in pursuing the objectives and priorities outlined in the African Union’s Agenda 2063.

We look forward to new areas of cooperation and support, such as the blue economy and the Fourth Industrial Revolution.

We gather here today in a rapidly changing and challenging global environment that is witnessing major shifts in international political, economic and social dynamics.

Globalisation continues to shape the world at an accelerating pace.

While globalisation has brought many benefits, these have not been evenly distributed between countries and within countries.

The negative effects of globalisation are manifested in rising populism, growing insecurity, weakening support for multilateralism, the erosion of democratic values, and climate change.

This has resulted in a fractured world, where some powers are prone to unilateral and protectionist measures.

Africa covers more than 20% of the Earth’s land surface.

It is richly endowed with natural resources and is one of the most economically and culturally diverse regions in the world.

Africa will experience profound change over the next 30 years.

Its population is likely to almost double to around 2.3 billion by 2045, comprising approximately a quarter of the world’s population.

On current trends, its economy will have quadrupled.

Technology is likely to play a major role in improving the quality of life for most Africans – by increasing access to high-quality health care and education, cheaper energy and information.

Africa is becoming more integrated into the global economy.

While such integration brings many benefits, it also makes Africa’s economies more vulnerable to global market fluctuations and crashes.

It also increases the volatility of prices for food and other essential commodities.

It is therefore essential that we strive to uphold the international trading order and the global development priorities contained in the Sustainable Development Goals and the Paris Agreement on climate change.

As we accelerate the pace of investment in infrastructure and industrial capacity, we must place the people at the centre of our efforts.

As we promote science, technology, innovation, engineering and mathematics, we must maintain a people-centred approach.

When we create jobs, it must be decent jobs to give our people dignity and a rising standard of living.

Our engagement within FOCAC should be strategic.

It should build links between dignity, work, opportunity and economic security for all our people.

Our people should see and feel the benefits of this strategic cooperation.

Allow me to conclude by echoing the words of the revered leader Chairman Mao, who said:

“To achieve a lasting world peace, we must further develop our friendship and cooperation with the fraternal countries in the socialist camp and strengthen our solidarity with all peace-loving countries.

“We must endeavour to establish normal diplomatic relations, based on mutual respect for territorial integrity and sovereignty and of equality and mutual benefit, with all countries willing to live together with us in peace.”

In charting the path ahead, we recall also the words of the first President of a free and independent Ghana, Kwame Nkrumah, who said:

“We have awakened. We will not sleep anymore. Today, from now on, there is a new African in the world!”

As Africa, we have awakened to the great potential that lies within our continent for inclusive growth and meaningful development.

With the assistance and the support of the Chinese people and government, we are certain that, working together, we will surely realise that potential.

Issued by the Presidency