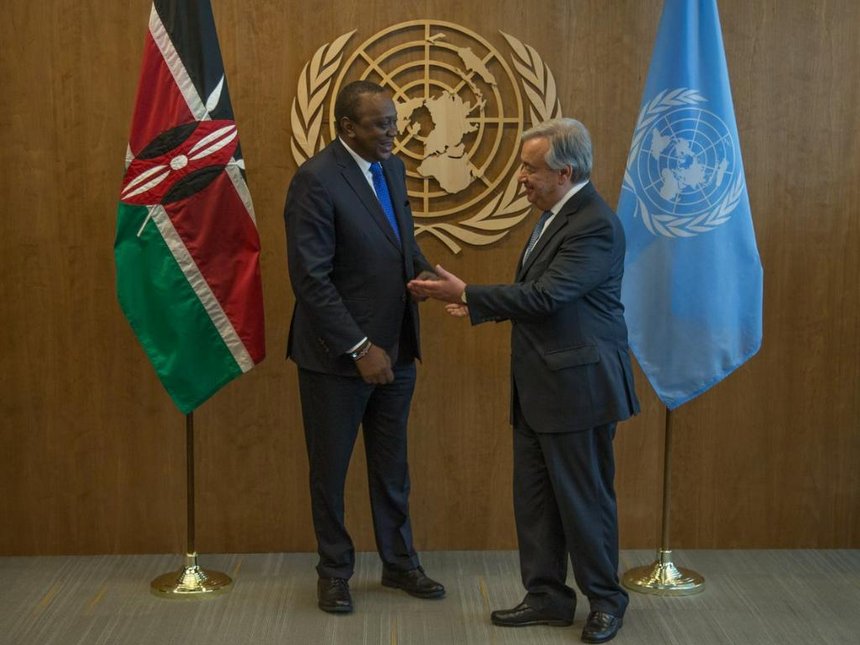 President Uhuru Kenyatta joined other world leaders Monday during the launch of a global partnership through which the UN seeks to get every young person into quality education, training or employment by 2030.

The new initiative, a partnership between the United Nations Youth Strategy 2030 and Generation Unlimited, aims at catalysing pro-youth actions to address the dreams, ambitions and hopes of 1.8 billion young people globally.

The new initiative, under the aegis of the United Nations children’s Fund (UNICEF) was launched at the Trusteeship Chambers , UN Headquarters, New York, on the sidelines of the 73rd United Nations General Assembly.

Uhuru, who was accompanied by First Lady Margaret Kenyatta at the launch, was unanimously endorsed as the global Champion of the Young People’s Agenda – a positions he graciously accepted.

Speakers at the launch, who included UN Secretary General Antonio Guterres, were optimistic the new partnership will tackle the global education and training crisis currently holding back millions of young people and threatening progress and stability.

The leaders said without urgent investment in education and skills training, the rapidly growing global population of adolescents and young people, expected to reach 2 billion by 2030, will continue to be unprepared and unskilled for the future workforce.

The global leaders were in agreement that there can never be peace and stability in respective countries if the interests of the youth were not urgently addressed.

Kenya, Rwanda and Ghana, which were represented by their respective Heads of State, were the first countries in Africa to embrace the new partnership.

“We do not champion the cause of youth opportunity and hope as a favour, but rather as the necessary, undeniable, embrace of our collective future,” he said.

The President applauded the UNICEF leadership in defining an ambitious agenda which he said was equal to the urgency of the moment.

“We must give young people education, and employment opportunities if our societies are to live up to their full promise,” the Head of State added.

The President promised the youth of his full support as he champions their cause but cautioned that the youth must also seize the occasion and shoulder responsibilities to move the world forward.

“On your part, embrace your chance to lead by seizing opportunity and turning it into tangible achievement. You must stand up, offer yourselves, dedicate yourselves, shoulder responsibility, and carry the world into the future,” he told the youth who were adequately represented at the launch.

Uhuru enumerated the various pro-active interventions Kenya has put in place for youth empowerment including the policy that targets 30 per cent of all government procurement that is awarded to the youth, women and the disabled.

Under the new initiative, Generation Unlimited will complement and build on existing programmes that support adolescents and young people.

The partnership platform will focus on three key areas: secondary education; skills for learning, employability and decent work; and empowerment.