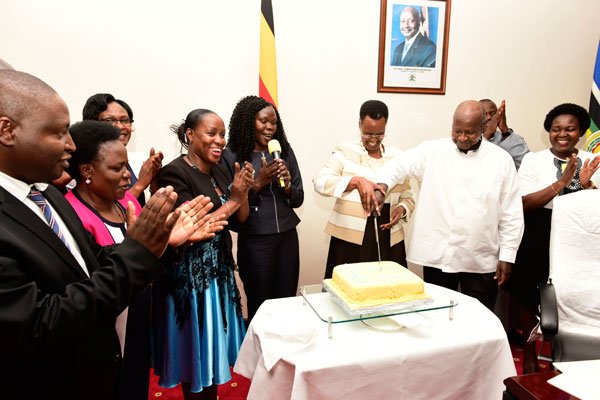 President Museveni has become more active recently, state minister for Youth and Children Affairs, Nakiwala Florence has said as she described the former guerilla who celebrated his 74th birthday on Saturday.

“The President is becoming more and more active. His life must be celebrated,” Ms Nakiwala said as she along with State Minister for Privatization and Investment, Ms Evelyn Anite on Monday presented a surprise cake for Mr Museveni at State House, Entebbe as a symbol of good health for the man who has been in power since 1986.

President Museveni, on his part, described the surprise cake as marking double celebrations, saying the day marked the 46th anniversary of the day when the liberation forces attacked Mbarara before they were repulsed.

“Thank you for the surprise cake to celebrate my 74th birthday. It is really a double celebration as this day also marks the day we attacked Mbarara before we were repulsed by Moses Ali group,” he said.

Museveni was born in Ntungamo in south-western Uganda in 1944 to Amos Kaguta, a cattle keeper. He was, according to his own testimony in his book “Sowing the Mustard Seed”; given the name Museveni in honor of the ‘Seventh Regiment of the King’s African Rifles’, the British colonial army in which many Ugandans served during World War II. At the time of his birth, many of them were returning home.Museveni