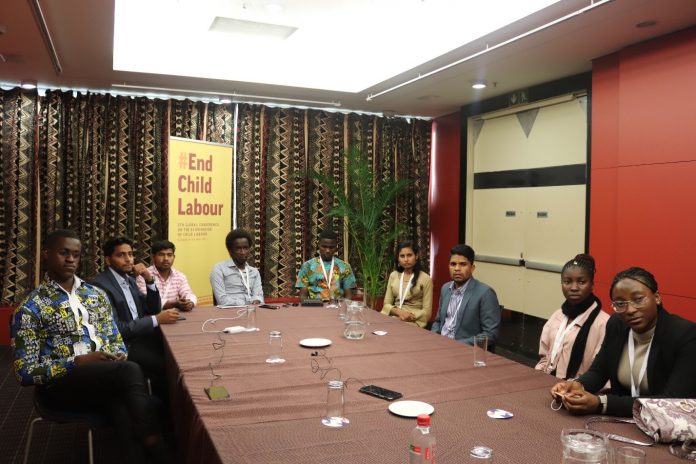 Starting on the 15th of May 2022, the 5th Global Conference on the Elimination of Child Labour launched in Durban, South Africa. This particular one is unique from its predecessors; not only is it on the African Soil for the first time, but it is the first time children are involved in the deliberations.

Amongst the memorable young activists, a few individuals stood out, and as the conference runs, we will shine a light on our rising stars. We are honoured and excited to present to you our young Activists.

Rebekka is an LLB student at the University of Namibia. Passionate about human rights and social justice. A vibrant young leader affiliated with a student organization (NANSO). She is at the conference as a delegate and was nominated by the youth in Namibia to represent them. Rebekka works alongside her peers under the 100 Million Campaign against Child Labour.

Esther, one of the youngest in the group, is currently a student at the Malawi Assemblies of God University in Lilongwe, Malawi. She is an entrepreneur running small scale businesses within the campus and is also serving as the Deputy Secretary-General for Southern Africa Students Union (SASU).

Divine is an artivist from Burundi, running the first and most popular podcast in the country. Besides only being 22, Divine has been writing and creating for years. He is currently studying Strategic Communication in Burundi. Divine continues to use his art to communicate important messages. Now he is here to use his art to stand up and create a voice for all the children in labour.

Leading the 100 Million Campaign team, 25-year-old Samuel graduated from the University of Professional Studies Accra with a Bachelor of Business Administration and is looking forward to pursuing further courses in International Relations and Public Policy. He is currently pursuing an MBA in Total Quality Management.

A Child labour survivor and advocate, Rajesh works with the Kailash Satyarthi Children’s Foundation. Together with his colleagues, they are working together to share their experiences with the panels and other youths present to help raise awareness and push the leaders to make the right decisions.

Tara is a 17-year-old child labour survivor and the youngest in the group. Tara is a first-generation learner from the Banjara community, a nomadic community in Rajasthan, India, who worked in road cleaning and construction until she was 8. Tara is now in college and hopes to join the police force. Tara is not just the first girl but the first child in her community to complete her schooling and pursue higher secondary education. She is an activist and made significant changes to her village and India as a whole.

Amar is a 25-year-old lawyer who is also a child labour survivor. Now he is an advocate and works with his colleagues to fight for children in child labour. Amar is also a speaker at the conference and works with Rajesh at the Kailash Satyarthi Children’s Foundation. His story has already moved delegates, and he set the pace at the conference as one of the first youth speakers.

Winnie Nyandiga is the Regional Organizer, Africa, 100 Million campaign, a call to action for a world where all young people are free, safe, and educated. She is also the Vice-Chairperson, Democracy and Participation, Commonwealth Students Association. The CSA promotes student voice and participation in policy and decision-making in education. She is a speaker and moderator at the conference and leads the group alongside Samuel.

Badku, 21, is among four people to represent India at the 5th Global Conference. Also a survivor of child labour and part of the Kailash Satyarthi Children’s Foundation, Badku speaks the truth and makes a stand for all the children trapped in child labour.

Lucky Agbavor, a former child labourer from Ghana, is also an advocate and speaker at the conference. Studying as a nurse at Pentecost University in Ghana, he has ambitions to be a doctor. He also announced that he hopes that he will be the president of Ghana one day. Together with this team, they will speak for the youths across the world and use their joint forces and influence to eliminate child labour by 2025.

This is only a scratch on the surface, and you will be hearing more about each individual young activist soon. Stay tuned for their feature stories, voices, and opinions. The future is in their hands, and we are more than excited to shine a light on our rising stars.