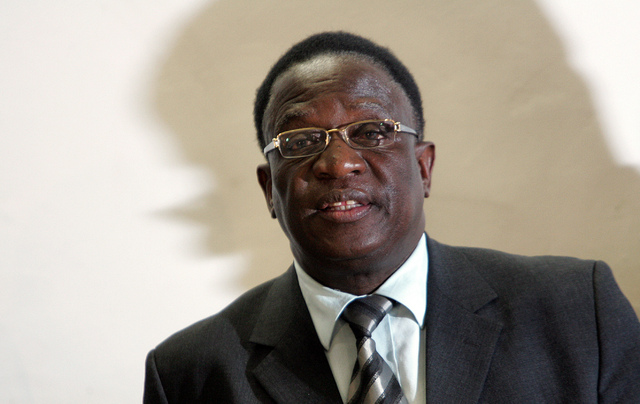 This follows Zanu-PF’s 6th National People’s Congress which saw Dr Joice Mujuru, who had been Vice President since 2004, falling by the wayside.

The announcement of a new Cabinet set up is expected today or tomorrow, including those who will replace the seven ministers and one deputy who were booted out of Government alongside Dr Mujuru for expending their time on graft, factional politics, and undermining the authority of the President whom they sought to depose or assassinate.

President Mugabe, who is also Zanu-PF First Secretary, made the announcement at the ruling party’s headquarters during an extraordinary meeting of the new Central Committee elected at the 6th Zanu-PF National People’s Congress which ended over the weekend.

He also abolished the post of national chairman and said his two deputies would take turns to chair party proceedings.

Cdes Mnangagwa and Mphoko are expected to be sworn in as State Vice Presidents at State House in Harare tomorrow.

Previously, the Presidium consisted of the President, his two deputies, the National Chairman and the Secretary for Administration.

The President started by announcing the abolition of the position of National Chairman before naming the Presidium.

“We are reducing that top heaviness, the two vice presidents have no real function except that they are my deputies and I can give them work to do.

“At the top is President Mugabe. There are two vice presidents one of whom would be drawn naturally from Zapu and one from Zanu and from Zanu it is Emerson Mnangagwa and we say congratulations to him and from Zapu side it is Report (Phelekezela) Mphoko.

“It is the three who will be known as the presidium now, the rest would be heads of departments.”

President Mugabe said a new department for war veterans, ex-detainess and ex-restrictees had been established to look at the welfare of the former freedom fighters.

Earlier on, President Mugabe had told the Central Committee and new Politburo members not to use their positions to devise sinister plots as done by former VP Mujuru and her cabal.

“We are in the driving seat and we must actually drive and not use our headquarters to plot and destroy the party. We have taken action on some but we now do know how the machinery of Mai Mujuru was running through vaMutasa and others here at headquarters, but we too at the top we will be vigilant,” he said.

The Zanu-PF National People’s Congress amended the party constitution to allow the President to appoint his deputies and national chairman to kill factionalism by ensuring that the party has one centre of power.

The practice of electing the vice presidents and others had become a breeding ground for factionalism, individualism and competing or multiple centres of power that afflicted Zanu-PF in the run up to Congress.

Meanwhile, President Mugabe said he would be making further announcements today or tomorrow on the new Cabinet set up.

“I will be making more announcements between tomorrow (today) and Friday to fill in the positions of the ministers we have withdrawn from duty. I can now say with regards to the vice presidents they automatically become the vice presidents in Government.

Cde Ignatius Chombo becomes Secretary for Administration, replacing Cde Mutasa who failed to make it to the Central Committee, while former secretary for the Commissariat Cde Webster Shamu was replaced by Cde Saviour Kasukuwere. Cde Kasukuwere was Secretary for Indegenisation and and Economic Empowerment in the last politburo.

The late Cde David Karimanzira who died in March 2011, was replaced by Cde Obert Mpofu for the post of Secretary for Finance, while the new Secretary for External Relations is now Cde Simbarashe Mumbengegwi, replacing the late Cde Stan Mundenge who died in October 2012.

The new Secretary for Transport and Social Welfare is now Cde Oppah Muchinguri after relinquishing her post of Womens Affairs. She takes over from Cde Nicholas Goche who was booted out of Government.

Former National Chairman Cde Simon Khaya Moyo, takes over the post of Secretary for Information and Publicity, replacing Rugare Gumbo who was expelled from the party.

Cde Patrick Chinamasa assumes the post of Secretary for Legal Affairs, taking over from Cde Mnangagwa who is now Vice President.

Cde Mike Bimha was appointed Secretary of the newly created post of Implementation and Economic Empowerment Policy, while Cde Josaya D Hungwe takes over the post of Secretary for Production and Labour which was held by fired Cde Dzikamai Mavhaire.

The new Secretary for Health, Child Welfare and the Elderly is Cde Cleveria Chizema, who took over from Cde David Parirenyatwa.

The Secretary for Economic Affairs is now Cde Christopher Mushohwe who took over from Cde Mpofu.

Dr Grace Mugabe is Secretary for Women’s Affairs,while Secretary for Youth Affairs is Cde Pupurai Togarepi, who took over from Cde Absolom Sikhosana.

Secretary for Education is now Cde Joram McDonald Gumbo, who took over from Cde Sikhanyiso Ndlovu.

Cde Thokozile Mathuthu is Secretary for Gender and Culture, while Secretary for Welfare for the Disabled and Disadvantaged Persons is Cde Joshua Malinga who took over from the late Cde Stanley Sakupwanya who died in July this year.

Secretary for Land Reform and Resettlement is now Cde Cain Mathema, taking over from Cde Chombo,while ousted Dr Olivia Muchena was replaced by Cde Jonathan Moyo who took over as Secretary for Science and Technology.

Cde Sithembiso Nyoni retained her post as Secretary for Business Liason and Development, while Cde Prisca Mupfumira is the Secretary for Environment and Tourism.