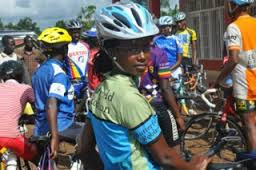 As part of a broader strategy to woo more female riders to join competitive cycling, the Rwanda Cycling Federation (FERWACY) has recently moved to scale up talent detection programmes across the country.

FERWACY president Aimable Bayingana said, “We have plans to achieve that through several initiatives across the country.”

“The biggest problem is that there are very few female cycling competitions on the continent but we are looking to introducing incentives and organize women competitions.”

Jeanne d’Arc Girubuntu is the country’s pioneer in female cycling and became the first black African female to compete in the World Championships last year in Richmond, USA.

FERWACY has requested for a wild card ticket from the International Olympic Committee (IOC) for Girubuntu, so she can take part in this year’s Rio Olympic Games due in August in Brazil.

“It would be a good thing if she can get a professional club,” Bayingana said.

Team Rwanda head coach Jonathan Boyer, who is also the director of the Musanze-based Africa Rising Cycling Center, said that scouting more female riders is a challenge; nonetheless, they are trying to address it.

“From the recent competition in Gicumbi for single speed gear races, we intend to select the best 10-12 riders to bring them and have them train at the center. We need to find more female riders.”

Boyer added that, “Girubuntu has proved that it’s possible and has opened doors for other potential female riders”.