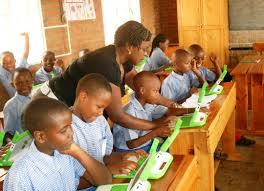 Rwanda has recently partnered with the Institute for Mathematical Sciences (AIMS), to introduce the Einstein form as a base in its educational system with the establishment of the AIMS Rwanda Centre of Excellence.
President and Chief Executive Officer of AIMS-NEI, Thierry Zomahoun, said at the invitation of President Paul Kagame, that AIMS would join the science and innovation ecosystem that the government was building with the goal of being a continental hub in technology.
“AIMS sees Rwanda as a conducive environment for its initiatives and we look forward to collaborating and supporting the local and regional research community.” The establishment of an AIMS Centre in Rwanda will support to build Science, Technology, Engineering and Mathematics (STEM) expertise. It is set to strengthen the scientific community in Rwanda and the region through an innovative Mathematical Sciences curriculum, relevant to development issues facing Rwanda and the region.
The centre will aims to raise the international profile of Rwanda and the region and its scientific community, by bringing in world-class renowned scientists including Nobel Prize winners, Fields Medalists and other highly distinguished academics as well growing the pool of skilled mathematical scientists and problem-solvers in Rwanda and the region.
The country also announced made the establishment of the AIMS Secretariat (Operations) in Rwanda and establishing the global headquarters of the Next Einstein Forum (NEF).
AIMS Rwanda Centre of Excellence, which will be a pan-African facility of excellence in mathematical science, is set to open in August.