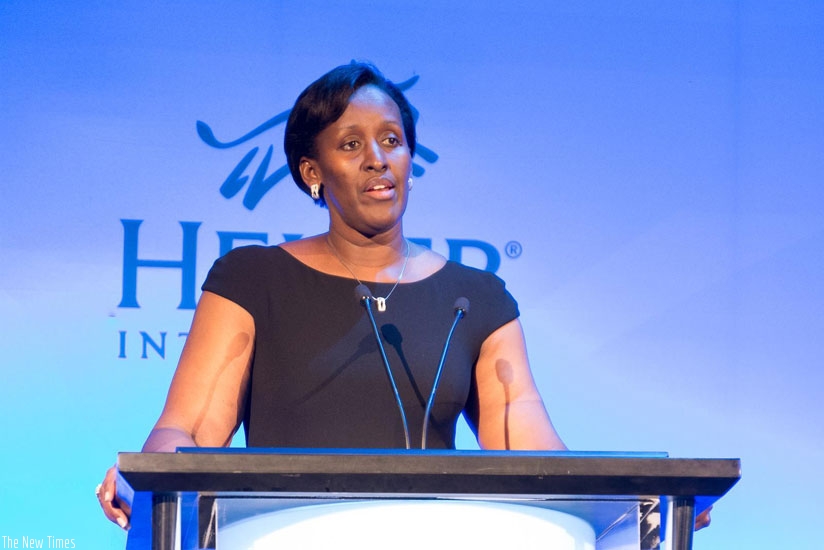 Rwandan women have been urged to avoid faltering on their current progress.

The First Lady, Mrs. Jeannette Kagame, made the call yesterday during the 25th anniversary of Pro-Femmes Twese Hamwe, an umbrella of women civil society organizations.

She made this call at the launch of a Rwf530-million complex located in Gahanga Sector, Kicukiro District, the first phase of a centre of excellence for women’s leadership that comprises offices, meeting rooms, among others.

Mrs. Kagame commended women for having ventured into activities that seemed difficult after the difficult times of the Genocide against the Tutsi the country went through.

She said the organization brought women together and helped them achieve things they could not have achieved alone.

The organizations working under Pro-Femmes Twese Hamwe are involved in banking, microfinance,

education, legal advocacy, among other activities that seek women empowerment and peace building.

Jeanne d’Arc Kanakuze, the chairperson of Pro-Femmes Twese Hamwe, said the organization advocated for the elaboration and implementation of laws that promote gender equality, empowering women to participate in decision-making processes among other things that improved the socio-economic status of women in the country.

According to her, the tremendous journey of women after the Genocide was made possible with the support of national leadership.

“After the Genocide, women were desperate but are nowadays optimistic due to good governance that backs the activities of women,” Kanakuze said.

“Because national leadership has been supportive, it was not difficult to defy the odds and engage women in leadership as well as advocate for revision of laws and policies regarding women,” she added.

The Minister of Gender and Family Promotion, Esperance Nyirasafari, reiterated that women have regained the dignity they were deprived of by bad leadership in the past.

“Women have been empowered and they have proven to be powerful. This is manifested through their involvement in leadership and development activities” she said.

Nyirasafari explained that Pro-Femmes Twese Hamwe activities have helped Rwandan society and women in particular, and called on women organizations to strive for further progress of women.

Pro-Femmes Twese Hamwe was initiated in 1992 with 13 organizations. It currently brings together 57 organizations with 58,000 members and 600,000 beneficiaries.