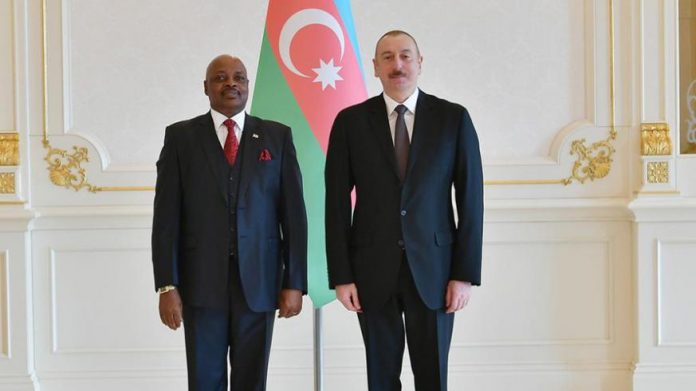 Azerbaijan President, Ilham Aliyev, has congratulated the Rwandan Ambassador to the country on his appointment and wished him success in advancing the Azerbaijan-Rwanda relations. Rwanda envoy to Azerbaijan presented his letter of credence to the President Ilham Aliyev in a ceremony at the Presidential Palace in Baku on Sunday.

Ambassador Williams Nkurunziza is resident in Ankara, Turkey. This marks a historic moment in Rwanda-Azerbaijan relations as he is the country’s first ever envoy to be accredited to the Republic of Azerbaijan. According to a statement, President Aliyev congratulated the Ambassador on his appointment and wished him success in advancing Azerbaijan-Rwanda relations.

The President also highlighted the importance for collaboration and deepening bilateral cooperation between the two countries in various areas including in economy, defense and security as well as enhancing trade relations. Further expressed interest in seeing high level engagements between the two countries with hope that this diplomatic milestone will facilitate high level official and business visits between Azerbaijan and Rwanda.

The Ambassador said that Rwanda was looking forward to collaborate with Azerbaijan in the areas of defense industry, aviation, energy, particularly in petrochemical industry and ICT as well as space industry.