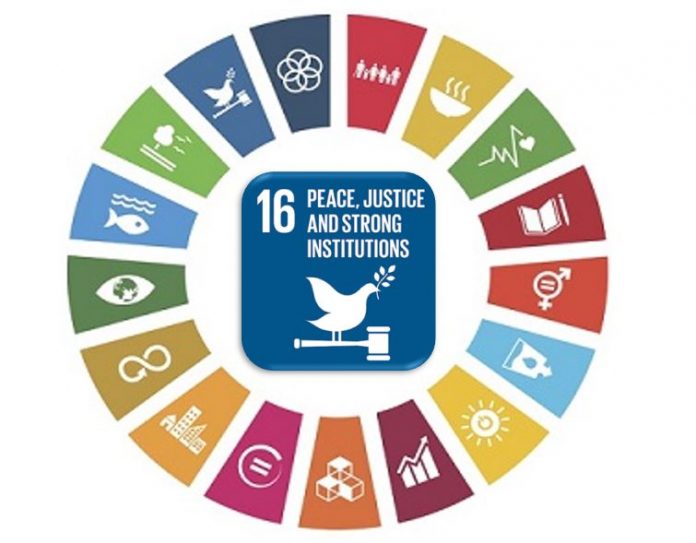 Sustainable Development Goal 16,( SDG16) as spelt out by the United Nations is all about peace, justice, and strong institutions.

It is one of the 17 Sustainable Development Goals drawn out in 2015 by the UN to chart the path to an equitable society for all by 2030.

The major targets of the goal are promoting peace, ensuring fairness and justice through the rule of law as well as ensuring human rights and equality are promoted.

Through the goal’s strong institution advocacy, corruption and bribery are expected to be addressed through the development of effective, transparent, and accountable institutions.

According to Wikipedia, Peace is a concept of friendship and harmony in the absence of hostility and violence. In a social sense, peace is commonly used to mean a lack of conflict and freedom from fear of violence between individuals or groups while justice refers to the quality of being just or upholding moral uprightness.

Institutions on its part are structures of society that fulfil the needs of the society and also help to build the society itself.

The elements of peace, justice and strong institutions are crucial to the existence of humans as no one can live and thrive well in an unjust or conflict-driven environment.

When there is conflict, families are scattered, nations are destroyed and humanity is challenged hence the constant pursuit of peace.

The desire for peace is what brings about justice and equity with equal opportunity for all while strong institutions are needed to pursue the goals of fairness through inclusion and indiscrimination.

These armed conflicts caused by various factors such as ethnic marginalization, bad governance and corruption, poverty, human rights violations, and religious extremisms among others have over time led to the loss of lives and properties, injuries, and displacements of people as well as other economic and social losses.

Conflicts hinder development and for a continent termed to be developing socio-economically, Africa needs to do away with conflicts for sustainable development.

Achieving this will mean engaging in activities that will bring to reality the SDG 16″ in the various countries right from the local level to the national level.

This is so because the underlying factors of SDG 16 align with other SDGs and it serves as the basis upon which other goals are achieved right from the grassroots levels.

In terms of ensuring peace, though all stakeholders must join hands to ensure it is achieved, the governments across countries in Africa have key roles to play by making sure that they do their part in the area of ensuring human rights are not violated, promises are kept and there is equity and fairness in the discharge of their responsibilities.

Governments must promote the rule of law at the local, national and international levels and ensure equal access to justice for all.

For Africa, success in achieving SDG 16 will depend on the leaders’ ability to implement human rights and good governance reforms in their countries.  So also, the various regional and economic groups in the continent need to come together and work with leaders of governments to advance the cause of good governance, peace, and justice.

It is at that point we make mention of strong institutions.

Strong institutions remain the link between those who deliver initiatives and those meant to benefit from the initiatives.

To move away from the path of building leaders in place of institutions and to the path of ensuring a just society, African leaders need to build institutions that will be accountable and transparent enough to stand the test of time and function properly.

By building strong institutions, the people’s confidence is boosted in the ability of those institutions to serve them right and fairly when needed without having to sacrifice conscience for money or other benefits.

Having strong institutions will also help to ensure the equitable distribution of resources, the enforcement of laws, and the growth of the economy.

The importance of institutions can not be over-emphasized as they contribute to stability, especially in times of uncertainty, and help anchor expectations.

Taking Nigeria as a case study, presently there is the buildup to the 2023 general elections, and the country’s electoral body, the  Independent National Electoral Commission (INEC) is the Institution of the moment. To this end, the people expect it to be fair and upright in its activities as its actions could either mar or elevate the nation. As an institution, it should carry out its mandate fairly without fairness or favour to any party or individuals.

The above should not be too much to ask for as a citizen if the government realises that the ultimate goal of all is to achieve an overall development where everyone is a responsible stakeholder and must be held accountable.

As much as governments work on building strong institutions, efforts should also be geared towards improving governance systems on the continent. Bad governance has been recognized as one of the problems in Africa and it breeds conflicts and restiveness. As such, Africans need to vote for credible leaders who will shun corruption and develop their various countries such that issues such as unemployment, poverty, and uneven development which cause unrest can be a thing of the past.

When there are credible leaders, values would be placed on human lives and equity entrenched through the provision of health, education, and other developmental institutions.

To make further headway, governments, civil societies, the organized private sector, and community leaders must all work together to generate realistic solutions to issues affecting their localities.

By this, opinions and expressions are heard without any form of discrimination and bias and possible solutions are arrived at leaving everyone with the consciousness of being held accountable.

It also brings to the fore, the role of all Africans. Everyone and indeed every citizen must take a genuine interest in happenings in their environments and what actions their governments are taking.

This will help raise awareness in the community on the role of all and the need for peaceful co-existence which will in turn enhance further developments in the society.

It will also encourage communal living and see to it that disputes are resolved amicably before they escalate.

Across the board, there are no easily achievable targets or goals, hence to make things happen, leaders will need to sacrifice a lot and show some form of political and moral commitment while the citizens will also need to display some form of loyalty and demonstrate their support by playing their role to make the set goals come to reality.

“SDG 16” is as important to development just as the development itself and for Africa, peace is unarguably needed just as justice served with humanity through credible institutions will not only put the continent in the good books of the United Nations but will also set a path of sustainable growth and socio-economic development for the continent and its people.