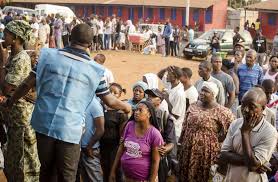 Sierra Leoneans will vote in a run-off presidential election on March 27, after neither of the candidates in the first round achieved the mandatory 55% of the ballot required to take office.

Julius Maada Bio, the candidate of the Sierra Leone People’s Party and former military leader of the West African nation in 1996, will face off against Samura Kamara of the ruling All People’s Congress, the National Electoral Commission said Tuesday.

With 43.3% of the vote, Bio led the first round of voting on March 7. Kamara, a former finance minister, followed a close second with 42.7%, the Electoral Commission said in a statement.

The winner of the run-off will succeed President Ernest Bai Koroma, who leaves office after serving two five-year terms.