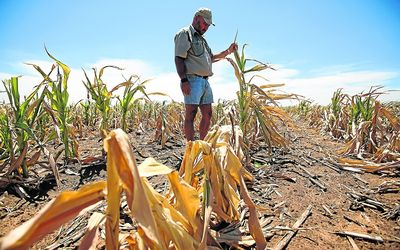 Innovations from crop insurance to swapping cattle for goats could help the region stand up to worsening drought, researchers say

Southern African farmers facing hunger as a result of worsening drought know a lot about climate change but lack the resources to put solutions that work into place, agriculture and development researchers say.

That is in part because government agricultural extension services, which offer training and advice to farmers, have too few agents, according to a report by the Technical Centre for Agricultural and Rural Cooperation, based in the Netherlands.

In many cases, farmers are simply not aware of potential solutions, said Oluyede Ajayi, a senior programme coordinator with the centre, speaking on the sidelines of a regional meeting this week in Johannesburg on scaling up climate-smart agricultural solutions.

Such shortcomings are one reason an ongoing drought in southern Africa has left 23 million people dependent on food aid, with another 13 million in need of help, according to the Southern African Development Community, which launched a $2.8 billion emergency appeal in July.

The best ways to assist southern Africa’s farmers, agricultural experts said, are by increasing their access to insurance for crop failure and livestock deaths, and giving them better weather advice via mobile phone.

Helping them diversify their sources of income also is key, they said, as is developing stress-tolerant seeds and better ways of managing land to conserve water.

One way of diversifying incomes and reducing risk, researchers said, was for farmers to raise fewer cattle and more drought-resistant animals such as chickens and goats – or even protein-rich insects. Many farmers, who pride themselves on their cattle, have so far resisted that switch.

But “goats, sheep and chickens are considered animals that can take care of themselves, unlike other animals,” said Shikhalazo Dube, a southern African representative of the International Livestock Research Institute.

Southern Africa so far this year has lost over 630,000 cattle, worth an estimated $220 million, to drought, according to the U.N. Food and Agriculture Organization.

That money could have been saved if farmers had taken out insurance on their livestock slaughtered them early in the face of drought warnings or found ways to feed them as pastures dried up, said Godwin Mashiri, a micro-insurance expert with mobile phone company Econet Wireless, based in Zimbabwe.

But persuading farmers to buy indexed insurance, which provides payouts when certain weather triggers are reached – such as a certain number of days without rain – remains a struggle, he admitted.

In Zimbabwe, some farmers in Mashonaland East province have adapted to the dryer weather by growing drought-resistant feed for their livestock, such as cowpea or velvet beans, alongside maize, the region’s staple crop.

The project, funded by the Australian Center for International Agricultural Research, has helped dairy farmers keep animals alive and helped them avoid buying costly commercial feed to get their animals through the drought, Dube said.

Similarly, farmers who are growing stress-tolerant maize using water-conserving techniques have seen their harvests rise by as much as 130 percent, Christian Thierfelder, an agronomist with the International Maize and Wheat Improvement Center (CIMMYT), told the Thomson Reuters Foundation.

But most farmers in southern Africa have been slow to make the switch, he said, because of lack of knowledge about the options or lack of capacity, such as access to seeds or needed machinery. Some also worry about controlling weeds under the new system, which reduces plowing of the soil.

Globally, 150 million hectares of crops are grown under “conservation agriculture” techniques, but only 10 percent of small-scale farmers in southern Africa have adopted them, Thierfelder said.

Such climate-smart agriculture is seen as key to helping farmers survive weather shocks, adapt to climate change and improve food security, according to the U.N. Food and Agriculture Organization.

The region has seen pockets of progress however, with more than 100,000 small-scale farmers in Malawi now adopting the techniques under a 12-year-old collaboration between Malawi’s government and Total LandCare, a non-governmental organisation.

Those that have adopted the changes have seen income from their farms rise by between 40 and 100 percent, according to a report by CIMMYT.