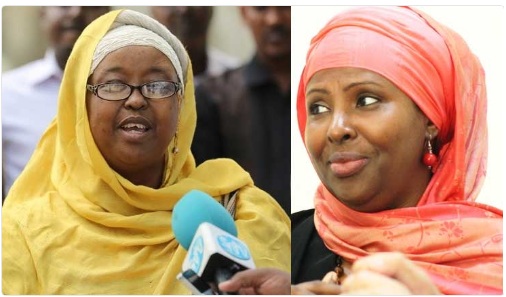 President Hassan Sheikh Mohamud has accepted two male who were already sworn to fill the vacancy after female cabinet members were shown the door.

Khadra Bashir Ali of Education and Hawo Hassan Mohmed of Health dismissal generated debate in the social media among the female activists.

Women rights activists in the country have described the decision by the federal government leaders as outrageous while confirming their rage through social media since the move.

Tweeter #‎UHiiliHaweenka which translates to #SupportWomen initiated by activists has gone viral since the announcement.

Activist shukri Islow immediately said in her tweeter account that she can’t believe the period between dismissal and replacement.

“30 percent quota for Somali women must be respected, tribal power share does not make sense,” she added.

Elman Human Rights Centre director Ilwad Elman said the action by the PM is worrying and constitutional right for women political representation in the country must be respected.

Another activist Fatima Abdullah advised the government to sack security officials who sleep on the job amid increasing Alshabaab attacks.

This recent move that angered female activists and politicians ironically come as women are negotiating for representation in upcoming elections.