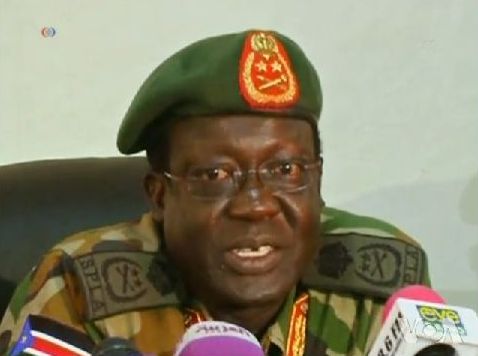 The former South Sudanese army chief General James Hoth Mai has been appointed Friday as minister of labour months ahead of the formation of the new national transitional government.

Mai who is a close ally to President Kiir had been relieved from his position as the SPLA chief of staff on 24 April 2014, four months after the start of hostilities between forces loyal to Kiir and his former Vice President Riek Machar in December 2013.

In a decree released on Friday, President Kiir relieved General Gathoth Gatkuoth Hothnyang from his position and announced the appointment of Mai as Minister of Labour, Public Service and Human Resource Development.

No reason was provided to explain the ministerial change, but the President recently has appointed a number of his close allies in different as governors and ministerial posts ahead of the new cabinet to be formed in line with the power-sharing deal signed in Khartoum with the opposition groups on 5 August.

General Hothnyang, who is also a follow Nuer like Mai, sided Machar when the conflict erupted in December 2013 but in July 2015 he broke away and formed his own group the Federal Democratic Party/ South Sudan Armed Forces (FDP/SSAF).

In April 2016, he signed a peace agreement with the government of President Slava Kiir.

On 16 March 2017, Hothnyang was appointed the minister of Labour.