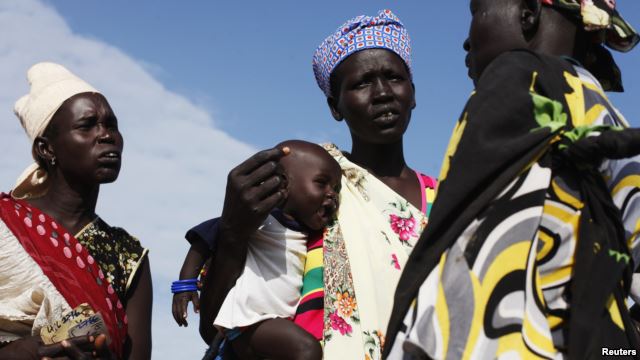 South Sudanese women’s rights activists are calling on the leaders of the Transitional Government of National Unity to include more women in the various branches of government that are to be formed. The women made the call Wednesday at the start of a two-day national conference in Juba.

Zeinab Yassin, chairwoman of the South Sudan Women’s General Association, said the conference is important for men and women to shed light on what is included in the peace agreement signed by President Salva Kiir and First Vice President Riek Machar, the former rebel leader.

“We are here to explain or to enlighten the women and educate them about the peace agreement, and let everybody have it in his hand to understand what the agreement our government signed is all about,” Yassin said.

Yassin said South Sudanese women must understand what is contained in the peace agreement before they can talk about what role women will play in the reconciliation and healing process. She called on South Sudan’s leaders to include women in the yet-to-be formed Commission for Truth, Reconciliation and Healing.

Specifically, Yassin appealed to leaders of the Transitional Government of National Unity to appoint at least one female judge to the Hybrid Court for South Sudan, which is outlined in the August peace agreement.

Conference facilitator Priscilla Joseph said women can and should play an active role in implementing the peace agreement.

“Women are part of this agreement,” she said. “This agreement is talking about us. There are structures in that agreement where we are supposed to be participating. The peace agreement is not only for the government. It is for all of us.”

Joseph said women have a duty to talk to their husbands and children about putting an end to violence. She stressed that women are the peacemakers in the family and community and, as such, they are key players in the healing and reconciliation process in South Sudan.

Gatrick Lubanga, who works for a local non-governmental organization called South Sudan Women for Peace, said at the conference that even though South Sudan’s leaders are dragging their feet in establishing all institutions of the Transitional Government, women will not stop pushing for lasting peace.

“We know our speed, we know our pace, and we expect that what has been lacking, what has been making the two parties not to come together, we want these gaps filled by what will come out of this meeting,” she said. “Women have been constrained; they have been challenged in many areas. The women here are saying we want to strive for peace and we want to work together with the men because we are always partners.”

Musician Beatrice Toni said she, too, can contribute positively in disseminating the message of what is contained in the August peace agreement through her music. She called upon the South Sudanese people to embrace peace through music.

The two-day convention addresses the role of women in fostering peace and security, but also the role of the National Ministry of Gender, Child and Social Welfare in ensuring that women have a voice in the new government.

More than 450 women from across South Sudan are attending the conference.