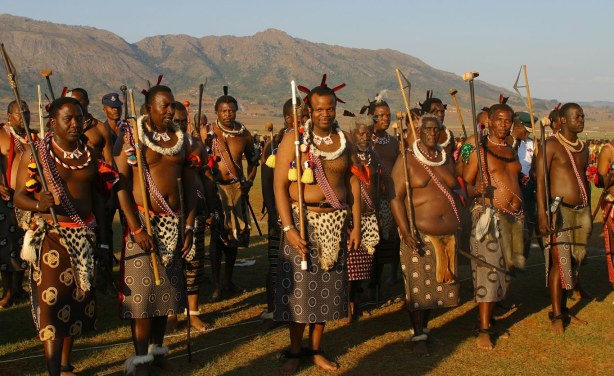 The King, aged 46, chose the teenager as his wife from among thousands of young virgin girls who danced semi-naked in front of him at the kingdom’s annual Umhlanga or Reed Dance in 2013.

The Observer on Sunday (31 August 2014), a newspaper in effect owned by the King, reported that Sindiswa Dlamini had been seen in public at the opening of a trade fair and this indicated that she was now officially the King’s wife. It had been announced in September 2013 that Dlamini had been chosen to be the King’s 14th wife.

Media in Swaziland predictably reported the event as if it were quite natural for a middle-aged man to wed a ‘virgin’ who was younger than many of his daughters.

But outside the kingdom, which King Mswati rules as sub-Saharan Africa’s last absolute monarch, the media have been more candid.

They reported Dlamini as the king’s 14th bride, although some counted her as wife number 15. The confusion was excusable since the number of wives the king has is considered a state secret in Swaziland and it is considered ‘un-Swazi’ to talk openly about King Mswati’s polygamy.

Media outside Swaziland reported that ‘Naughty Sindi’, as the Sunday Sun newspaper in South Africa described her, has had affairs with two of King Mswati’s sons, Prince Majaha and Prince Bandzile, who are both in their early twenties.

One unnamed source told the newspaper, ‘Sindi has dated both these boys. She’s a party girl used to having fun.’

Another informant told the Sunday Sun, ‘Sindi is no virgin. She drinks and smokes a lot and has tattoos on parts of her body I cannot mention.’

One source told the newspaper, ‘She is only doing it [marrying the king] because she comes from a poor background.’

The media in Swaziland never report about the King without his permission. This means people across the world are better informed than the King’s subjects, the Swazi people. Most media in the kingdom are under direct state control, opposition political parties are banned as ‘terrorist’ organisations and any political dissent is quickly crushed by police and the army.