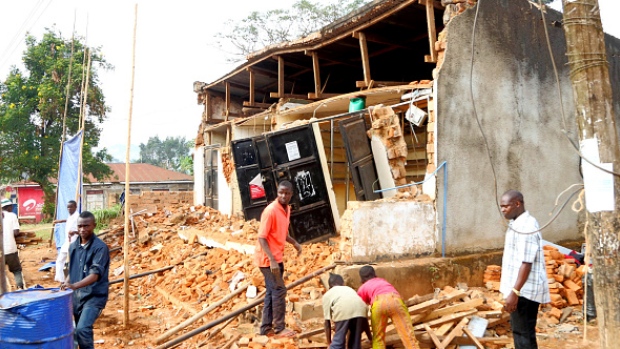 More than 5 billion is needed to repair over 5,000 houses, which were badly damaged by last weekend’s earthquake in Bukoba Municipality and its environs.

As experts are still conducting more evaluation on the damages caused by the quake, urgent repairs are required for the badly damaged houses. Kagera Regional Commissioner (RC), Major General (Retired) Mustafa Kijuu said yesterday that the stated amount is an early estimation of the resources needed to remedy the situation.

He said the death toll remains the same at 17 but while around 50 injured persons are still admitted to the Kagera Regional Hospital, 26 of whom are in need of special medical treatment, including surgery.

“We are still going on with the assessment of the loss and damage, which requires closer attention to address.This should be regarded as a national disaster needing national attention,” the RC pointed out. Maj. Gen. Kijuu said according to the survey, people were still terrified to the extent of refusing to take shelter outside their devastated houses, which might cause more health concerns.

However, he added, the disaster committee has come out with a number of solutions that would be implemented as the funds flow in. He mentioned some of them as donation of building materials and rent assistance to the tenants whose houses were demolished.

The RC said that plans were afoot for each affected household to be given 20 iron sheets and five bags of cement to start with. “We have estimated an emergency assistance to the victims, which will see households being furnished with building materials while tenants will be given six-month rent support,” Maj. Gen. Kijuu further said.

He also announced the coming of aid from well-wishers and development partners mentioning some of them as China and the US Embassy. Other institutions that has responded to the situation include the Bugando Medical Centre whose Director General and at least 15 experts are at the Kagera Regional Hospital to boost up services.

Meanwhile, experts from the Geological Survey of Tanzania (GST), led by the Chief Executive Officer, Professor Abdulkarim Mruma, paid a visit to the RC and presented their views on how best such tragedies could be managed in future. Prof Mruma said although it is difficult to contain situations, people living in the affected areas must take precautionary measures to avoid more loss of lives.

In another development, the Chinese Embassy has deployed a team of six doctors to Kagera Region to work with local doctors in saving the lives of more than 250 people who were injured during the unprecedented earthquake that hit the region at the weekend.

In the same vein, former President Jakaya Kikwete yesterday sent a condolence message to President John Magufuli following the deadly quake, also congratulating him for cancelling his trip to Zambia so that he could monitor and deal with the post-tremor effects.

“He was set to travel to Lusaka to attend the swearing-in ceremony of Zambian President Edgar Chagwa Lungu but because of the Kagera disaster, he decided to stay in the country,” Mr Kikwete said when addressing people at Msoga Health Centre in Bagamoyo.

According to a statement issued by the Office of Public Diplomacy and Press Section of the Chinese Embassy in Dar es Salaam yesterday, the Chinese doctors’ team is led by Professor Jiang Yonghua.

Other members of the team are Dr Zhou Zhongxiang (physician), Dr Song Shuguang (general surgeon), Dr Wang Xin (paediatrician) and Dr Li Qiang (gynaecologist). The team met the Regional Medial Officer (RMO) and the Director of the Regional Hospital to receive information about the situation and discuss before chatting the way forward.

The embassy in collaboration with Chinese Communities further donated 100m/- humanitarian assistance to support relief measures for earthquake survivors in Kagera Region. The embassy’s donation complements the efforts of the Disaster Management Department under the Prime Minister’s Office.

The donation includes tents, food items and medicines that was transported to Kagera Region and expected to arrive late yesterday or today morning. It will be handed over to the Regional Commissioner’s office. The RC is coordinating the disaster management committee.

A number of diplomatic missions, business groups and individuals on Tuesday provided and pledged emergency relief aid, including cash donations to assist victims of last Saturday’s earthquake in the region.

In Bukoba Municipality yesterday, Chama Cha Demokrasia na Maendeleo (CHADEMA) donated 1.4m/- for purchasing medicines as well as helping the families that were hit by the disaster.

The tremor, never experienced in such magnitude in recent times, hit the Lake Victoria-side municipality of Bukoba, leaving 17 people dead and more than 250 others injured.

According to a geologist assessment, the tremor reached 5.7 Richter scale.