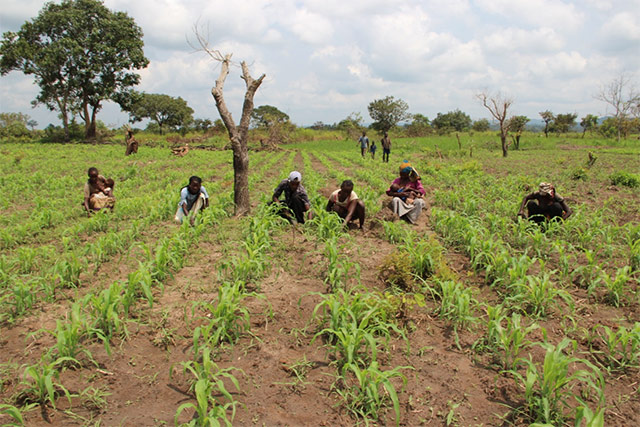 Farmers in the Central African Republic are struggling to bounce back from years of intermittent violence, where smallholder female farmers were unable to tend their fields during the conflict. With support from local non-governmental organisations working from the grassroots level, women farmers are creating new opportunities to get back on their feet.

“This war affected rural women a lot, because they lost their farming equipment, they lost their husbands, their children, they lost everything,” says Odette Guerel-Baïlé, founder of Women, Flowers of the Central African Republic, an NGO working with female smallholder farmers nationwide.

Guerel-Baïlé, who trained in Japan, had set up a women-only rice collective in Bossangoa, some 325 kilometres north of the capital, Bangui. Bossangoa is just one of the towns hit hard during the CAR crisis that kicked up in late 2012, where death and internal displacement became the norm for Central Africans trying to flee from the sectarian and political violence.

“In Bangui, we have a site for selling on the PK45 road to Bouali, but because of all the events, the women are depressed right now, so we haven’t gone back,” says Guerel-Baïlé, referring to one of the neighbourhoods in Bangui.

The difficulty is starting from scratch. Even trusting neighbours can be problematic. The UN’s Food and Agriculture Organization (FAO) has stressed that the agricultural sector needs to reintegrate vulnerable people, youths, and farming families to improve their production. It is a formula put to good use by Meraline Donko, the president of Sala Naita, “Working with your Neighbour” in Sango, one of the country’s national languages.

“When we started with our present group, there were orphans, adults and the elderly, from 13 up to age 55,” says Donko, in a country where life expectancy is 54 years for women, 51 for men.

Sala Naita, a micro group of 30 farmers, grow peanuts and lettuce, which is irrigated from a nearby canal. Work is delegated by Donko according to age, where the younger workers pull weeds and learn from the elder participants, who have a more advisory role.

“There are young people who we teach to farm, to show them that you can get on in life by doing this work, instead of stealing or robbing people,” Donko tells RFI, sitting next to one of the peanut patches. “For the older people too, there are those who show the younger ones so they understand how to work, because the youth get disillusioned,” she adds.

The hierarchy works well, especially for Pimprenelle Lacourse, a young mother who heads the technical department of Sala Naita. She likes the work. “I’m really interested in this, because it helps us a lot and we love peanuts,” says Lacourse.

“The fact that I’m in charge helps me too. I say this because now I’m around mothers who I think work even harder in the corn and peanut fields,” she adds.

Peanut sellers walk around the markets in downtown Bangui with their home-grown wares wrapped in small plastic bags; but businesswomen need to have basic mathematics and reading skills in order to conduct sales. Many women never went to school, so they have to give their vegetables to their husbands or others to sell. Less than 25 per cent of the female adult population in the country over the age of 15 can read and write, according to the UN’s Environmental, Scientific and Cultural Organisation (UNESCO).

Empowering women to take control of their business is a key aim of the Central African Women’s Association for the Fight Against Illiteracy (AFCLA), a non-governmental organisation founded in 2001 by Léa Ngaidama.

“We teach operational literacy-it’s tied to their daily lives, for them to take charge of their own businesses,” says Ngaidama. The program is structured on three levels, with the first teaching women to read and write in Sango over a six-month period, where they learn vocabulary and mathematics according to their needs as small-scale farmers. Level two is a complimentary course, where students add to their knowledge. Upon completion, the women can read and write. Level three concentrates on testing women in everyday situations that they might encounter.

Those who graduate in Sango have the option to take the same programme in French.

AFCLA’s targeted literacy course has educated some 10,000 women throughout the country and has additional positive effects. Although female farmers have a hard time trying to juggle working in the field, children, and daily household tasks, the programme is flexible, to allow a farmer to make up a day if harvesting or taking care of a sick child becomes a priority.

“Usually at the beginning, the husband doesn’t want his wife going to class, but he gradually sees how her progress can also help at home. He sees that things are better for his wife and he starts to trust her,” says Ngaidama. “When his wife goes to school, he knows that she is learning. And the children must help out around the house, that’s often what happens.”

Easing the burden of female farmers’ backbreaking manual labour is not lost on the Central African Republic’s Agriculture Minister Honoré Feizoure, who hopes to bring the sector into the 21st century.

“Our vision, under the new government of Professor [President Faustin-Archange] Touadera, is to modernise the agricultural sector. We must mechanize agriculture to lighten the load of working women,” he says.

The FAO has urged the new government to make agriculture a priority, noting the “alarming” deterioration of CAR’s food security situation during the past year. Feizoure says that the country needs to work past the immediate needs and concentrate on long-term development goals.

“I truly hope that all the partners who have greatly supported the Central African Republic during the emergency period won’t leave us when we pass from emergency to development to stabilise the agricultural sector,” says Feizoure, who sees food insecurity as having contributed to the country’s conflict.

“When you stabilise agriculture and maintain food security, you’ll have security in general in the Central African Republic,” he adds.