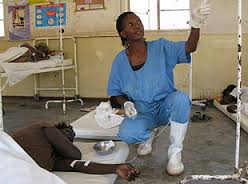 The World Health Organization (WHO) has recently asked the government of Tanzania to educate those in communities on effective measures to curb cholera instead of threatening to take legal measures against them.
WHO representative to Tanzania, Dr Rufaro Chatora said this during a regional health meeting.
He said the public must be accurately informed of the consequences of not taking care of their surroundings and taught how to preserve clean and safe drinking water.
“The government must take serious measures to stop the spread whenever it erupts. We should avoid blaming one another or threatening to take legal measures against the victims,” he said.
At the same meeting Regional Commissioner, Ms Chiku Galawa lashed out at civic leaders for failing to contain cholera in the region.
She said, “It is obvious that we have a big problem here, regional and district directors have failed to fight the disease. How come you have failed to make use of technology to ask for daily reports from subordinates in your area?”
According to the RC, the directors were supposed to know the number of families that do not have toilets, and take on measures to address the situation.
Kongwa District Council chairman, Mr White Zuberi said every leader must work harder to sensitise the public on cholera. At least 17093 cases and 262 deaths have been reported across the country. Dodoma, 23 people have so far died of cholera and 742 have been infected since September last year.