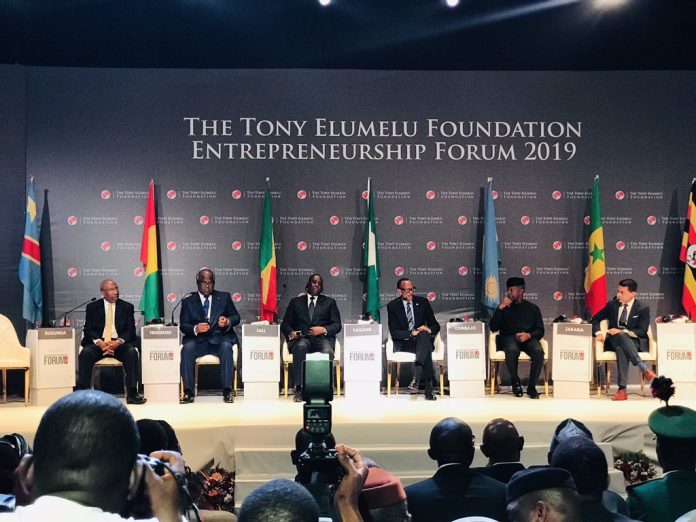 The initiative is based on the belief that, with the right support, entrepreneurs can be empowered to contribute meaningfully to Africa’s shared prosperity and social development and economic diversity with the intent to instigate and recreate economic pan-Africanism. The Foundation is intent on charting a new course for African philanthropy and does not operate merely as a grant-awarding organization.

This year’s cohort saw to the mentorship, training, and seeding of over 3,000 young Africans, from over 216,000 applicants. The event provided a unique opportunity for young women and men, from all 54 African countries, to converge and network within the bigger framework of a unified African market place. With works which have garnered attention, making significant progress displayed by alumni of the program’s past edition, the event was punctuated by brilliant African craft and innovative designs around the Transcorp Hilton Hotel environment.

Speaking while delivering the keynote address at the event’s opening, Dr. Awele Elumelu, Tony Elumelu Foundation Trustee and Founder/CEO, Avon Medical, spoke in length, with admirable details of the journey so far. In her narration, the Tony Elumelu Entrepreneurship Program which has its sight on empowering over 10,000 African entrepreneurs with a $100 million has gained traction for its engineered concept the Africapitalism. 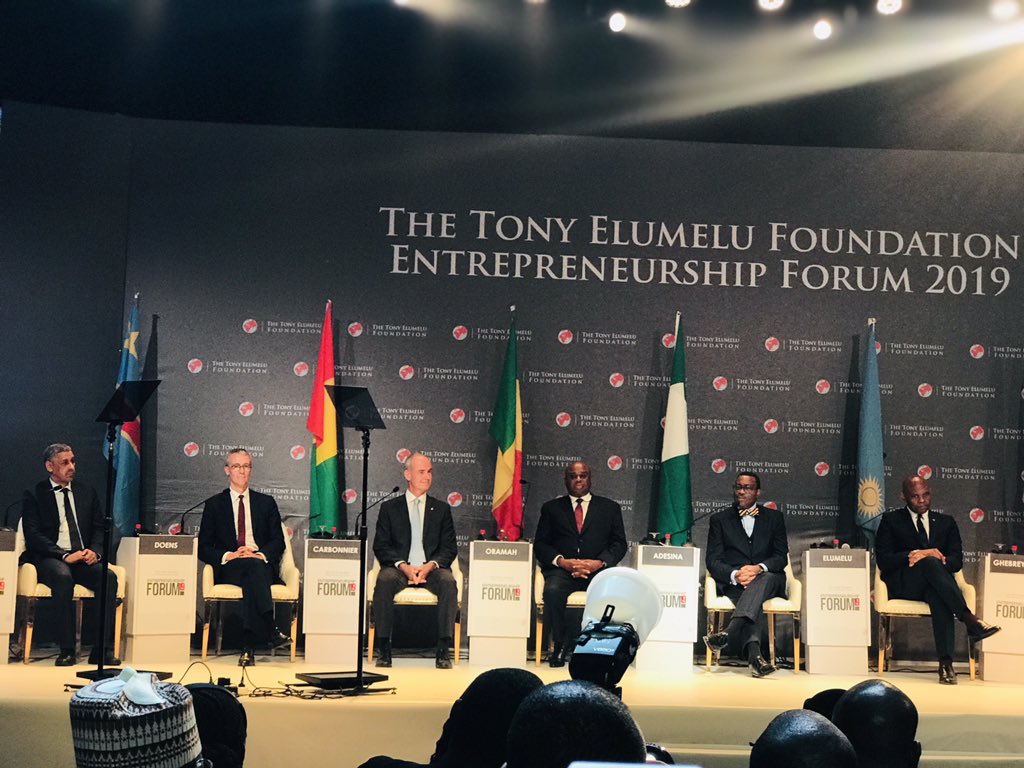 Africapitalism, a neologism underlines the economic philosophy that the African private sector has the power to transform the continent through long-term investments, creating both economic prosperity and social wealth. In Africapitalism, approximate terms such as “inclusive capitalism”, “impact investing,” “conscious capitalism” and “philanthrocapitalism” are condensed in the theory of “creating shared value”. Dr. Elumelu extolled the efforts of several African governments, speaking highly of the collaborative efforts of the various governments, international donor agencies, social partners who have all contributed to the growth and reiteration of the programs through many social and capital investment vehicles across the continent.

Present at the Presidential Convening were the Presidents of Rwanda and the Chairman, African Union, His Excellency Paul Kagame, President of Senegal, H.E Macky Sall, President of the Democratic Republic of the Congo, H.E. Félix Tshisekedi, Nigeria’s Vice-President, Prof. Yemi Osinbajo and Rt. Hon (Dr.) Ruhakana Rugunda, Prime Minister, Republic of Uganda. In his comment, President Kagame spoke of the need for an African identity “We have managed to change the mindsets of our people, to know what they stand for, what they need to do, what they have in themselves, and we have united our country.” Speaking further he said “Women make up 62% of the Rwandan parliament. my Ministers make up 50%. in the judiciary, we have 45% women. Men have been complaining but we also point out areas where they are dominating to bring about balance.”

President Macky Sall of Senegal opined that “The wealth of Africa is first and foremost its human resources”. Nigeria’s Vice-president, Yemi Osinbajo was effusive in his praise for the activities that heralded the event and the continuous improvements on the program. Prof Osinbajo said “Today is the most advanced moment in human history and this generation is the smartest that has ever lived. We must find young entrepreneurs and provide opportunities for capacity building. By birthing this intervention, Tony Elumelu has compelled us to focus on what matters – our youths and their dreams.” 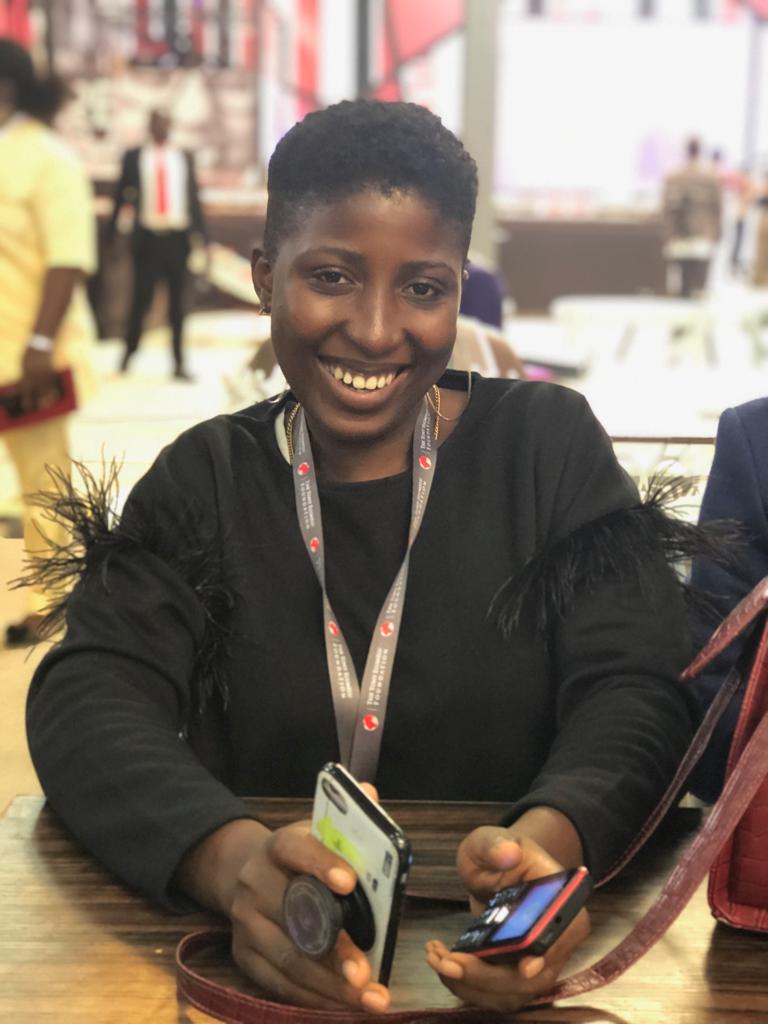 One of the beneficiaries, Ololade Odunsi, spoke elatedly about being chosen for this year’s edition. Miss Odunsi, the proprietress of Iwose Footwear, a Lagos-based footwear company in response to how she started her company said “I started my business with personal funds and at a point in time it became difficult to sustain it. Access to the TEF startup fund will provide me with the opportunity to operate at a sustainable level and market my brand to its target market.” In building an interconnected market with other entrepreneurs she said “We all are making do with available resources and skills but connecting and collaborating with other African entrepreneurs would create different sequences and diversity of skills as well as resources. I already made plans to collaborate with a Cameroonian who makes footwear with beads as that type of skill is not common in Nigeria. On the other hand, Cameroon lacks ample supply of materials in their leather industry but Nigeria does and I plan on taking advantage of this gap to push my products into the Cameroonian market.”

The activities included plenary sessions, masterclasses for the TEEP entrepreneurs, and a beehive of activities at the famous UBA Marketplace. The UBA Market place which was an exhibition site for over a hundred entrepreneurs drawn from the length and breadth of the continent featured food, fashion, beauty products home and decor. The exciting experience of visiting the marketplace did not whittle down activities such as the masterclass and mentorship sessions that went on at the market place. Quite unlike the conventional markets, there were complimentary activities like the movie screening all day, the games – virtual and real, fashion shows by a myriad of fashion collectors as well as the star-studded closing concert led by the UBA Brand Ambassador and Nigerian Afropop artist Wizkid and DJ Cuppy.