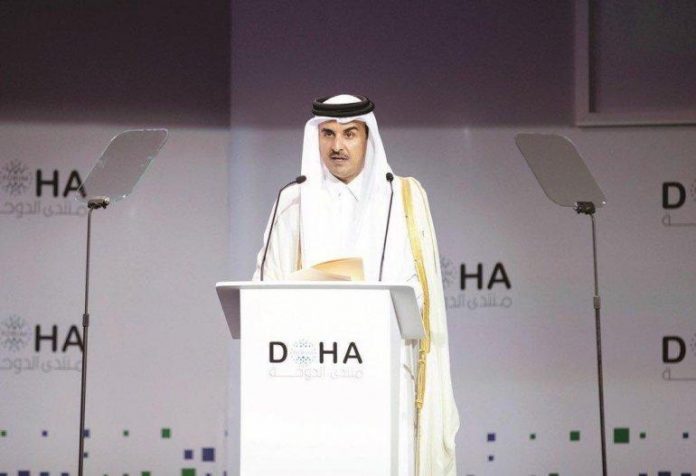 The Amir of Qatar, HH Sheikh Tamim bin Hamad Al-Thani, has called for a coordinated effort in tackling the issues of poverty, wars and the aggravation of asylum and immigration. The Amir made this call during his opening speech at the ongoing 19th Doha Forum with the theme: “Reimagining Governance in a Multipolar World”.

In his words, “as you know there is a close correlation between poverty, wars and the aggravation of asylum and immigration issues. Armed militias have taken advantage of conflicts and the process of holding war criminals accountable became complex.”

Continuing, the Amir maintained that, “these problems cannot be solved without coordinated international efforts and shared visions, likewise the issues of violent extremism which is not restricted to a religion or a race, and which is indiscriminate in targeting the innocent, and making no distinction based on gender, racial or religious grounds.”

He further stated that Qatar has committed itself to not just criticize the situation but rather try to contribute to answering these questions, even if only partially.

While highlighting the importance of the Forum, the Amir, stated that “in addition to our policies which are based on respecting the international law and international legitimacy and contributing to solving conflicts peacefully through mediation and providing a space for dialogue, we have also established platforms such as the Doha Forum and the Doha Conference on Interfaith Dialogue, which we launched 16 years ago for building dialogue bridges.”

The Amir also stated that, beyond the Conferences and Forums, Qatar has contributed to relief and development across the globe. In his words, “at the relief and development level, we announced on the sidelines of the United Nations General Assembly session last September the allocation of $100 million to small island states to cope with climate change. The State of Qatar has also pledged to provide education to one million young girls in conflict areas by the year 2021. In addition to the efforts of non-profit Qatari organizations, such as the Education Above All Foundation which works alone to provide education to 10 million children in conflict areas around the world.”

“This is a modest effort in a world where around 262 million children worldwide are outside educational institutions, in addition to conflict zones where 27 million children are deprived of their basic right to education. But we are doing our part.”

The Qatar Development Fund contributes around $600 million annually to relief, educational and health projects in about 59 countries across all continents. Also, Qatar Charity contributed about $400 million to development projects for the benefit of about 10 million people in 50 States.

The Doha Forum has become the premier policy forum in the Middle East, designed to galvanize thought-provoking debates on dialogue, diplomacy, and diversity. This year’s forum has brought together policymakers, world leaders, and experts from around the world under the theme “Reimagining Governance in a Multipolar World”.