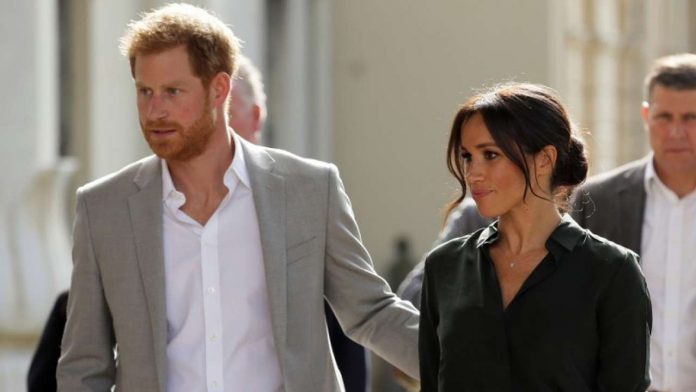 Harry and Meghan arrive in South Africa with Archie after flight delay and have been photographed with baby son Archie wrapped up for the visit.

Harry and Meghan’s son was pictured cradled in his mother’s arms, wearing a bobble hat to keep out the strong Cape Town wind.

The royals jetted to Africa on a British Airways flight that arrived almost 40 minutes late, and were flanked by staff in high visibility jackets, one with the initials VIP on the back, as they disembarked privately ahead of their first appearance in the city this afternoon.

The couple will visit a township where they will see an initiative which teaches children about their rights, self-awareness and safety, and provides self-defense classes and female empowerment training to young girls.

During the event Meghan, who is a champion of gender equality, is expected to add her voice to the thousands who have spoken out about the rising violence against women in South Africa.

The couple are visiting Africa over 10 days and while the duchess and Archie will stay in South Africa for the duration, the duke will visit Angola, Malawi and Botswana before being reunited with his family in Johannesburg.

Harry and Meghan arrived laden with gifts for the nation’s children from presents originally donated to their son Archie.

They will give clothes, books and other items to an Africa-based charity that trains and employs women living with HIV as community health workers.

Harry will travel to Angola on Friday to pay homage to the work of his late mother Diana, Princess of Wales, who campaigned for landmines to be outlawed during a visit she made to the country in 1997.

He will also pay tribute to a British soldier killed by an elephant during anti-poaching operations in Malawi when he visits the country on September 30 to focus attention on efforts to protect endangered animals.

The Duke is especially proud to continue the legacy left by his mother with her work in Angola as he joins Halo Trust again in an effort to rid the world of landmines. The Duke is particularly proud to be able to deliver an exciting new initiative, a Queen’s Commonwealth Canopy three-country partnership which he designed and consulted with Governments in Namibia, Botswana and Angola to protect forest and wildlife corridors around the Okavango Delta. The Duchess will be working with local organizations to promote women and girls’ health and education, entrepreneurship and leadership. With such a textured culture and history, Their Royal Highnesses are grateful for the opportunity to connect with those on the ground in Southern Africa and to be inspired by the work being done and learn how they can be better supported. As President and Vice President of The Queens Commonwealth Trust and The Duke’s role as Commonwealth Youth Ambassador, The Duke and Duchess cannot wait to meet with young leaders mobilizing change and adding to the beauty of these Commonwealth countries.