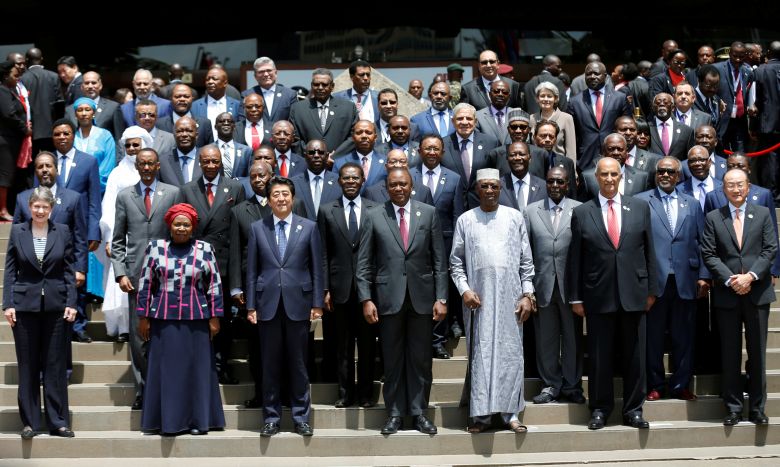 Japan will over the next three years invest U.S. $30 billion in private and public support for the development of infrastructures and the expansion of education and healthcare systems in the continent. This was the pledge of the Japanese Prime Minister, Mr Shinzo Abe, at the recently-held Sixth Tokyo International Conference on African Development (TICAD VI) in Nairobi, Kenya.

TICAD, which will now be held after every 3 years, is the laudable initiative of the Japanese Government. It was launched in 1993 to promote mutually-beneficial growth and development, as well as peace and security between the Asian country and the continent of over 1 billion people. It facilitates high-level policy dialogue between African leaders and its development partners to mobilise international support for Africa’s development.

The sixth conference was attended by thirty-four (34) heads of states and governments and 10, 000 delegates. In cooperation with the African Development Bank, Japan is set to invest $10billion, complemented by about $20billion investment influx from Japan’s private sector, during the same period, to address the continent’s power shortages and outages, boost infrastructure development, and arrest poverty.

The $30 billion announced at the 2016 meeting is in addition to the $32 billion that Japan pledged to Africa over a five-year period at the last TICAD meeting in 2013. The Japanese Prime Minister said 67% of that had already been put to use in various projects. Japan has unarguably and evidently demonstrated that it is commitment towards supporting African ownership and promoting infrastructural development of Africa.

The index of Japan- Africa partnership sperms from the need for infrastructural development by Africa and Japan’s strong desire to benefit from the natural resources and economic opportunities in the African continent, with the huge market in terms of consumption the continent provides for Japanese products. Meeting the needs of the other has been the element of the mutually-beneficial partnership between the two parties.

Japan mainly exports cars, machinery, ships, electronic goods, iron and steel to Africa; and majorly imports oil and natural gas from the continent, with demand jumping after the 2011 Fukushima nuclear disaster that shut almost all of Japan’s nuclear reactors. Africa’s exports to Japan in 2015 were valued at $8.57 billion, according to the Japan External Trade Organisation, compared with imports worth $11.6 billion. The value of Japanese imports from Africa over the past five years has roughly balanced its exports to the continent, with both averaging $12.8bn a year.

Japan could be said to be leading the way in project finance for Africa’s development. Over the last five years, the Foreign Direct investment (FDI) from Japan to Africa averages $4.2bn annually. The country’s overall direct investment in Africa totalled $1.24 billion in 2015, down from about $1.5 billion investment in 2014, according to the Japan External Trade Organization.  The $900million financing the Bank of Japan provided for the 2.6-billion-dollar 1.38GW coal-fired power plant in Morocco is a testament that Japan is the most active Asian project finance sponsor in Africa.

Africa has significantly benefitted from the partnership with Japan. In area of infrastructure, the Asian nation has over the past 23 years remarkably and commendably invested $47 billion in Africa. The Japanese International Cooperation Agency (JICA), the development arm of the Japanese Government, has predominantly, over recent years, heavily invested in Africa-owned infrastructural development projects in Eastern Africa. The new container terminals at Mombasa in Kenya and Nacala in Mozambique, being constructed, are good examples of infrastructure development projects sponsored by Japan in East Africa.

U.S. $500 million has been allocated by Japan for investment in the port at Mombasa, being one of the areas in Africa that currently receives Japanese funding and other assistance for development. Close to half of that figure has already made available as a loan with low interest rate, over a 40-year period, for the construction of the second Container Terminal (CT2), expected to be completed in three phases. The first phase of the project which consists of two births has been completed. It adds a 900-meter in quay length to the existing 840 m, with an alongside depth of 15 m and a 35 ha container yard. Two ship-to-shore cranes and four rubber-tired gantry cranes operate at the site. The two additional phases are planned for completion in 2017 and 2020.

The project is significant in facilitating trade and movement of goods between countries in the sub-region. The Mombasa port handles imports and exports for Uganda, Burundi, Rwanda, South Sudan, DR Congo and Somalia. In terms of cargo tonnage and container throughput, the port is Africa’s second largest port.  Total throughput in tonnage terms grew 7.5 percent in 2015 to 26,732 million tonnes. Container throughput increased by 6.3% to 1.1 million teu. The new terminal, when completed by 2020, will bring the capacity of the congested port to 2.5 million TEU per annum to help meet the projected rise in the port’s container throughput to 2.6 million teu by 2025. This will make the Port of Mombasa the largest in the region.

At Nacala, Japan is simultaneously providing a loan U.S. $250m at a low interest rate to fund the on-going construction of the new container terminal. The Nacala terminal is primarily being developed to handle coal exports from Tete Province in the northwest of Mozambique. The construction of the modern container terminal with new cargo handling equipment will boost wider economic activities in the country, benefiting landlocked Malawi and Zambia which make use of Nacala.

Japan supports for Africa’s developmental efforts, particularly at Mombassa and Nacala, by providing finds, also helps in strengthening economic relations between with Africa. Mombasa and Nacala, located on the east coast of Africa, are strategically significant in enhancing Tokyo’s trade with Africa. The improved facility ate Nacala will also essentially benefit Japanese mining companies, such as Nippon Steel & Sumitomo Metal, which are active in Tete.

Relatedly, at communal levels, Japan’s Grant Assistance of Grassroots Human Security Project (GGP) is tremendously promoting inclusive development in Africa. The GGP funds projects across a number of sectors of the country’s economy, improving education, rural development, health care delivery, rural electrification, solar energy development, and standard of education. Since 1998, the Japanese Embassy in Nigeria has implemented over 152 GGP projects worth over $US10million. For instance, about US$103, 068 was provided in 2016 for the procurement of medical equipment for a general hospital at Suleja in Niger State, Nigeria. 9 kinds of medical equipment, 12 kinds of medical tools, and 13 kinds of furniture for the hospital were procured for improve healthcare delivery in Suleja community.