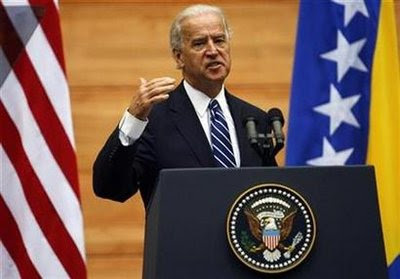 US Vice President Joe Biden did not mince words while stating the importance of US trade with Africa to the US economy, as he, on Tuesday, addressed the U.S.-AFRICA BUSINESS FORUM hosted by Bloomberg Philanthropies and the U.S. Commerce Department.

“I believe there’s a significant opportunity for the United States and Africa to do more that benefit both of our peoples”, Biden was quoted by Bloomberg Television. He added that it was crucial for America’s economic self interest to trade with Africa which, through the $50 billion worth export market it currently provides the US, supports a quarter of a million American jobs.

With African consumers’ $1.3 trillion spending projected to double by the year 2030, the US Vice President averred that American Businesses are eager to “show up” and “compete alongside India and Chinese, European companies for African trade and investment”.

However, Biden also highlighted Africa’s gain from trade with the US especially through AGOA, the African Growth and Opportunity Act, which he stated has allowed more than 6,400 African products to reach American customers duty-free, supporting African jobs and industries range — ranging from vehicles to vegetables.

Since 2010, Biden remarked, “non-oil exports from sub-Saharan Africa to the United States have almost quadrupled”, making a case for why trade and investments between the United States and Africa should “double or triple or even quadruple in the decades ahead”.