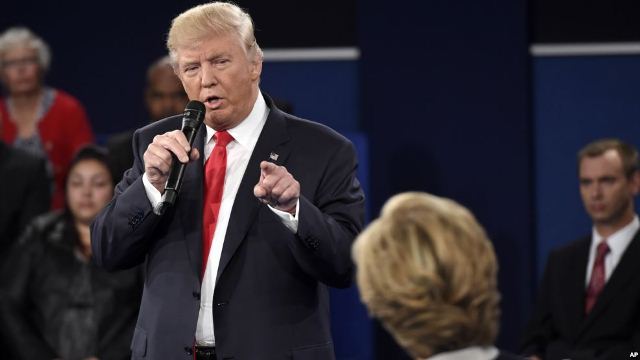 The U.S. election cycle has featured no shortage of candidates sniping at each other, but the attacks went to a new level Sunday with Donald Trump saying he would launch a federal investigation against his opponent, Hillary Clinton.

The scene unfolded during their second debate as Trump sought to defend remarks captured on a 2005 tape that surfaced Friday in which he made lewd comments about women, including saying he can grope them because of his status.

Trump denied he had actually carried out any of those actions. He said he is embarrassed and hates what he said, insisting he has great respect for women and that it is time to talk about more important things.

“I don’t think you understand what was said at all,” he said. “This was locker room talk. I’m not proud of it.”

Clinton said the tapes raise questions about whether her opponent is fit to be president.

“Trump when asked about the tapes right off didn’t answer the question,” said Terri Bimes, assistant director of research for the Institute of Governmental Studies at U.C. Berkeley. “He went into this canned answer about ‘Make America Great Again.’ He always has these great one liners, and he came back with that kind of approach but he really didn’t answer the questions a lot of times, on healthcare, on what would you do about the humanitarian disaster in Syria, he really didn’t answer that. But I felt like he came across probably better to his base than the first debate.”

For his part, Trump added to the criticism of Clinton’s use of a private email system when she was secretary of state, suggesting her actions amounted to an unprecedented level of deception.

Clinton called him a liar, and repeated that she takes responsibility for her decision and that there is no evidence any classified information ended up in the wrong hands.

“It’s just awfully good that someone with the temperament of Donald Trump is not in charge of the law in our country,” she said.

“Because you’d be in jail,” Trump replied.
Mike Dawidziak, president of Strategic Planning and a former consultant to President George H.W. Bush, said Trump’s plan to appoint a special prosecutor could be the biggest talking point of the debate.

“He threatened to use the power of the presidency and the legal system if elected to put his political opponent in jail. That’s a pretty powerful statement,” Dawidziak said. “And she missed a golden opportunity to say, ‘That’s the first time in a debate that I’ve ever been threatened.'”

Dawidziak said there was not much new in this debate, or in their first match-up, in terms of substance and that Sunday’s event was fairly even “because it was pretty much a mud fight.”

Clinton said she would revamp President Barack Obama’s landmark healthcare program. Trump said he would scrap and replace it. Both candidates criticized each other’s tax policies.

They also clashed on who was responsible for allegations that Obama was not born in the United States.

Last week, Republican Mike Pence said during a vice presidential debate that if Russia continues bombing over the northern Syrian city of Aleppo then the United States should attack Syrian military targets in response.

Trump said Sunday night he disagrees with his running mate, stressing that he believes Syria is fighting the Islamic State militant group and that should be a priority.

Clinton has long advocated following current Obama administration policy of going after Islamic State with more airstrikes, no U.S. soldiers on the ground, disrupting the group’s online propaganda efforts and cutting off the flow of foreign fighters to Syria and Iraq.

She and Trump agreed Sunday on the need for safe zones to protect civilians, while Clinton added she would establish a no-fly zone over Syria that Obama has resisted.

Trump also said it would be great if the U.S. got along with Russia in order to fight Islamic State together. Clinton described the situation in Syria as “catastrophic” with the Syrian government and Russia bombing places like Aleppo. She said she supports efforts to investigate both of those parties for potential war crimes.

And Trump criticized Clinton’s backing for rebels opposed to Assad, saying she does not know who the rebels are.

“Every time we take rebels, whether it’s in Iraq or anywhere else, we’re arming people,” Trump said. “And you know what happens? They end up being worse than the people.”

Trump’s first mention of Islamic State on Sunday night came when he was asked about a 2005 tape that surfaced Friday in which Trump made lewd comments about women, including saying he can grope them because of his status.

“Trump when asked about the tapes right off didn’t answer the question,” said Terri Bimes, assistant director of research for the Institute of Governmental Studies at U.C. Berkeley.

“He went into this canned answer about ‘Make America Great Again.’ He always has these great one liners, and he came back with that kind of approach but he really didn’t answer the questions a lot of times, on health care, on what would you do about the humanitarian disaster in Syria, he really didn’t answer tha,” Bimes said. “But I felt like he came across probably better to his base than the first debate.”

Bimes told VOA Trump wanted to show Republican elites they should not abandon him, while Democrats were probably disappointed Clinton “didn’t knock Trump out with this debate.”

The candidates have four weeks to try to convince the remaining undecided voters. They will use television ads, appearances at events across the country, and another debate on October 19.

Bimes said Clinton needs to focus on the so-called swing states during the final month of campaigning.

“Trump has challenged her on stamina issues. She needs to show that she’s an energetic campaigner. And not just do fundraisers, do rallies and get out there, and I think with the groundwork that she’s laid with get out the vote efforts she will be in pretty good shape.”

Who would female voters choose?