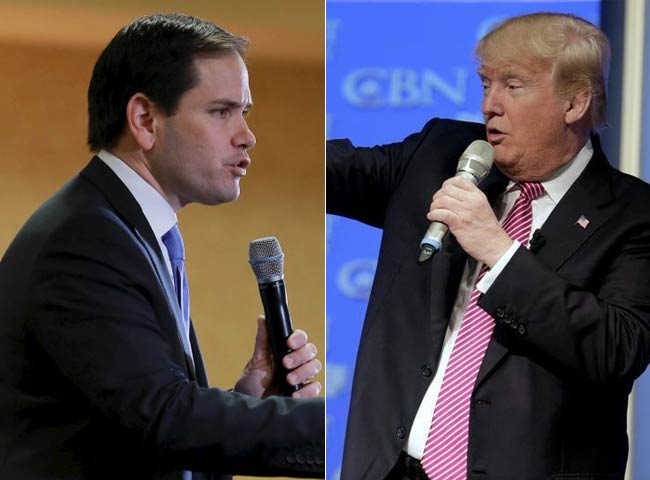 U.S. Republican front-runner Donald Trump swept three states and drove rival Marco Rubio out of the White House race, but the New York billionaire’s loss in the crucial state of Ohio wrought more chaos for a party deeply fractured by his candidacy.
While the Republican race remained in turmoil on Tuesday, Hillary Clinton’s victories in Florida, Illinois, Ohio and North Carolina cast doubt on U.S. Senator Bernie Sanders’s ability to overtake her for the Democratic Party’s nomination.
Trump’s wins in Florida, Illinois and North Carolina brought him closer to the 1,237 delegates he needs to win the nomination and left those in the party trying to stop him with a dilemma.
Republicans can either throw their weight behind a candidate who rejects their policy goals or go on trying to stop him in the hope that he falls short of the majority required, enabling them to put forward another candidate at the July convention in Cleveland to formally pick their candidate for the Nov. 8 election.
That, however, would risk alienating the millions of Americans who back the real estate developer and former reality TV show host.
Ohio Governor John Kasich’s victory in his home state left him as the last establishment Republican candidate standing after Rubio, a U.S. senator, pulled out of the race. Rubio lost in a Trump landside in Rubio’s home state of Florida.
U.S. Senator Ted Cruz of Texas, who has sought to fashion himself the lead anti-Trump alternative, was outclassed by Trump everywhere on Tuesday except Missouri, where he narrowly trailed Trump.
Early on Wednesday, MSNBC projected Trump and Clinton would win Missouri in very tight races. With 100 percent of the votes counted, Clinton led Sanders by about 1,500 votes and Trump led Cruz by about 1,600 votes.
Many party leaders are appalled at the billionaire Trump’s incendiary rhetoric and believe his policy positions are out of step with core Republican sentiment, such as his vow to deport 11 million illegal immigrants, temporarily ban Muslims from the United States, build a wall along the border with Mexico and impose protectionist trade policies.
But their bid to stop him has come too late as a Republican field that once included Trump and 16 high-profile party figures has dwindled now to only three with Trump, 69, in command ahead of Cruz, 45, and Kasich, 63.
Trump, speaking at his Mar-a-Lago beachfront resort on Florida’s Atlantic Ocean coast, called on Republicans to unite behind him and made a point of mentioning that he had spoken to the two top elected Republicans in the United States, House of Representatives Speaker Paul Ryan and Senate Majority Leader Mitch McConnell.

“The fact is we have to bring our party together,” Trump, more restrained than usual, said at an event that was billed as a news conference but where he took no questions.
“We have something happening that actually makes the Republican Party the biggest political story anywhere in the world,” he said, referring to what he says are the millions of new voters he has attracted to the Republican Party.
“Democrats are coming in, Independents are coming in, and very, very importantly, people that never voted before. It’s an incredible thing,” Trump said.
After Tuesday’s victories, Trump needs to win about 54 percent of the roughly 1,100 delegates still up for grabs. It’s not an insurmountable challenge, especially when factoring in winner-take-all states, like Arizona’s 58 delegates and New Jersey’s 51 delegates.