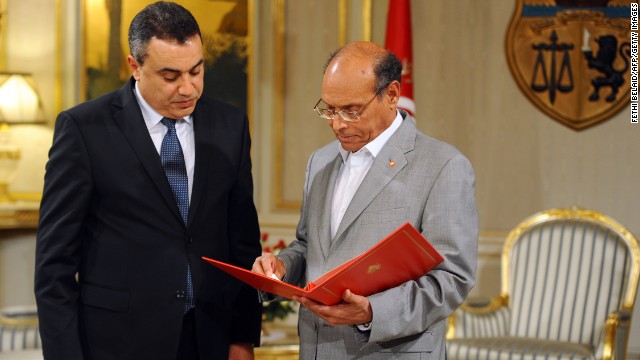 The text was passed with 200 votes, the state news agency TAP reported. Twelve members voted against the measure, and four abstained.

Alongside the vote, Prime Minister Mehdi Jomaa appointed a caretaker Cabinet as part of a deal to end a crisis between Tunisia’s Islamist party and its secular opposition until new elections.

The approval of the new constitution is one of the last steps to establishing full democracy in the North African country, the cradle of the 2011 Arab Spring uprisings that toppled autocratic leaders in one of the most conservative corners of the world.

Its drafting lasted two years and exposed a deep rift between the Islamist Ennahda party and the secular opposition.

But after months of political crisis and sporadic violence, Sunday’s milestones contrast sharply with messy transitions in regional neighbors Libya and Egypt — still caught up in turmoil after ousting their own longtime leaders in 2011 revolts.

“All eyes around the world are fixed on Tunisia’s democratic experience,” assembly chief Mustafa Ben Jaafar was quoted as saying by TAP.

The once-banned moderate Islamist Ennahda party won elections in October 2012 — the first after Ben Ali’s ouster in January 2011 — and formed an Islamist-led government.

But political turmoil has beset the country, which relies heavily on foreign tourists for revenues.

One of the most secular nations in the Arab world,Tunisia slid into a stalemate after the assassination of two secular politicians last year, widening divisions over the role of Islam.

Ennahda condemned the killings, but the opposition accused it of failing to rein in radical Islamists.

Under a deal agreed between Ennahda and the opposition, the ruling party agreed to hand over power once parties had finished writing a new constitution and appointed an electoral commission to oversee new elections.

TAP said Jomaa’s new government was made up of 21 ministers and seven secretaries of state. It consists mainly of technocrats

Jomaa, an engineer and former minister, was appointed premier in December.

Two years after Moammar Gadhafi was toppled, Libya’s government is weakened by political infighting and fragile security forces, a constitution has yet to be drafted and armed militias do as they please in a country awash with weapons.

Egypt’s own elected Islamist president, Mohamed Morsy, was deposed by the army. The country’s interim government has labeled his Muslim Brotherhood organization as a terrorist group.

Egyptians this month approved their new constitution as part of a transition plan from army chief Gen. Abdel Fattah el-Sisi after he ousted Morsy in July.