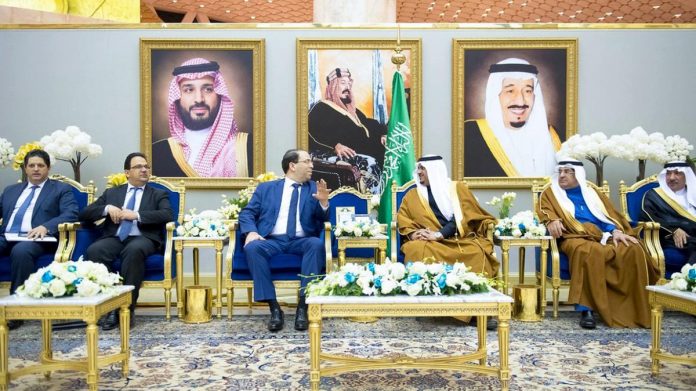 Tunisian Prime minister Youssef Chahed arrived in Saudi Arabia to meet with the kingdom’s leadership less than a month after the Saudi Crown Prince returned from a visit to Tunisia.

The trip comes after the request of the Crown Prince Mohammed bin Salman in an attempt to improve the bilateral relations between the two countries.

Mr. Chahed’s three-day trip “comes at the request of the Saudi Crown Prince…and is part of pushing bilateral relations between the two countries to wider horizons,” according to a statement put out on Wednesday by the presidency.

Prince Mohammed’s visit to Tunisia last month was part of a wider tour of the region and marked the first trip from a top Saudi official to the country since the 2011 unrest in the North African country.

During the visit he met with Tunisian President Beji Caid Essebsi, who said the crown prince was “not merely a guest of Tunisia, he is at home here”.

Saudi Arabia agreed to loan $500 million to Tunisia as part of a series of deals announced days after a visit by the Crown Prince.

A number of political and civil society groups criticized the Saudi Crown Prince’s visit, with hundreds gathering in Tunis to demonstrate against his arrival.

While many of the banners referred to the murder of journalist Jamal Khashoggi in the Saudi consulate in Istanbul, others said that the prince did not represent the values of the Tunisian revolution that ousted long-term leader Zine Abedine Ben Ali in 2011.