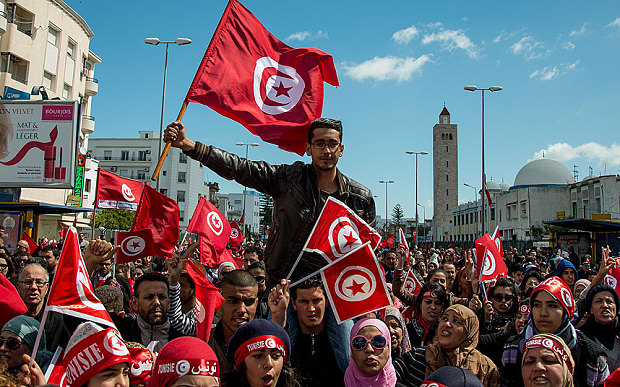 People in the Tunisian resort town of Sousse have held a march to denounce the attack in which at least 38 people, most of them tourists, were killed by a gunman on a nearby beach on Friday.

The crowds gathered late on Saturday at a hotel also targeted by the attacker.

They marched through the town expressing sympathy with relatives of the victims, 15 of whom were British.

Tunisia’s PM Habib Essid announced a security clampdown after the attack claimed by Islamic State (IS).

He said army reservists would be deployed to tourist sites. About 80 mosques accused of inciting violence would be closed within a week, he added.

Friday’s attack was the deadliest in Tunisia’s recent history. In March, militants killed 22 people, mainly foreigners, at the Bardo museum in the capital Tunis.

‘My brothers and sisters’

The demonstrators marched after dark on the streets of Sousse, with many holding candles.

A separate rally was held in Tunis. “The victims are my brothers and sisters in humanity,” protester Karima Benhajj told the AFP news agency.

Among those so far confirmed dead by family or friends are:

One Belgian and one German have so far been identified among the dead, the Tunisian health ministry said. One citizen of the Irish Republic is also confirmed dead. There were also thought to be Tunisians killed in the attack.

At least 36 people were injured, some seriously.

Many of the tourists in hotels targeted in the attack have left the country or are waiting for specially arranged flights, but correspondents noted a few were back by the hotel pool on Saturday, vowing they would continue their holidays as scheduled.

Tunisia’s economy relies on tourism, and there are fears that the recent attacks will deal a major blow to the industry.

Security officials said the attacker, who posed as a swimmer but was carrying a rifle under a parasol, started shooting on the beach before entering the Hotel Imperial Marhaba, continuing to shoot.

Officials later identified the gunman as 23-year-old student Seifeddine Rezgui. They said they had no inkling of what he had been planning.

The country has recently seen militant Islamists gain strength since the overthrow of long-serving ruler Zine al-Abidine Ben Ali in in 2011.

the number of tourist arrivals to Tunisia in 2014