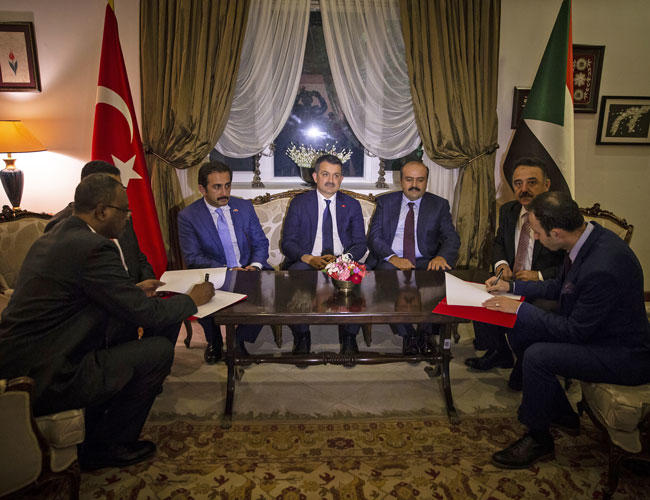 Turkey and Sudan have signed a $100 million oil exploration deal and an agreement allocating thousands of square miles of Sudanese agricultural land for investment by Turkish companies, Turkey’s agriculture and forestry ministry said on Sept. 11.

The two countries have strengthened ties and agreed in December, when Recep Tayyip Erdoğan made the first visit to Khartoum by a Turkish president, to gradually increase trade to $10 billion a year.

The Turkish ministry said Sudan had designated 780,500 hectares (3,000 square miles) of land for investment by private Turkish companies, saying it would “provide security of food supply for Turkey, Sudan and third countries”.

The Turkish Petroleum Corporation (TPAO) and Sudan’s Ministry of Petroleum and Gas also signed an oil field development agreement, which would initially lead to an investment of up to $100 million, Turkey’s Agriculture and Forestry Minister Bekir Pakdemirli said in a statement.

The ministry gave no details about the nature or location of the investment, but Turkey’s state-run Anadolu Agency quoted Pakdemirli as saying it was an exploration agreement.

Turkey’s Ziraat Participation Bank will also open a branch in Khartoum to strengthen financial ties, and customs procedures for machines and equipment imported from Turkey to Sudan will be eased, the ministry said.

A year ago, the United States lifted a trade embargo and other penalties that had cut Sudan off from much of the global financial system, but Khartoum’s economy is in crisis, battered by shortages of hard currency and basic food.

A decision to reduce bread subsidies, leading to a doubling in prices, led to rare nationwide protests earlier this year.

On Sept. 9, President Omar al-Bashir dissolved the government and promised a leaner administration to address the crisis.

Turkey, which has strained ties with regional powers Egypt and Saudi Arabia, has boosted investments in Sudan recently.

It plans to rebuild a ruined Ottoman port city on Sudan’s Red Sea coast and construct a naval dock to maintain civilian and military vessels under an agreement reached between the two sides during Erdogan’s visit to Khartoum.