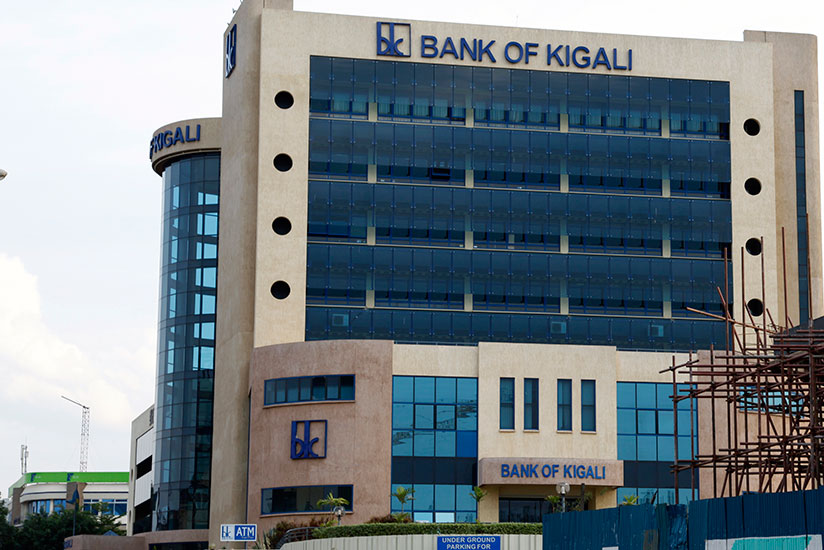 Listed banks in Rwanda have reported strong growth in profits in the first half of the year despite a tough business environment, thanks to interest income and commissions.

The banks — KCB, I&M, Equity and Bank of Kigali – reported a combined net profit of Rwf21 billion ($24 million) against the industry total of Rwf22.9 billion ($26 million) in the half-year ending June 30.

In the same period last year, the banks made Rwf17.3 billion ($19.7 million) against the industry’s Rwf22 billion ($25 million), according to consolidated data from the National Bank of Rwanda. There are 16 banks in Rwanda.

The listed lenders have managed to remain profitable in a competitive market by automating their operations, which has helped them cut operational costs.

They have invested heavily in automating their services and product delivery through mass rollout of automated teller machines, agency banking and e-banking. Currently, only six banks use agency banking. As a result, the number of branches decreased from 553 in June 2017 to 522 during the same period this year.
Bank of Kigali, the biggest player by market share and profits generated Rwf13.4 billion ($15.4 million) during the reporting period; from Rwf16.7 billion ($18.9 million) in the first half of the year ending June 2017.

According to a financial statement published by the Bank of Kigali at the end of last month, net interest income increased by 16.1 per cent year-on-year to Rwf35.3 billion ($40 million).

“BK Group Plc continues to demonstrate strong performance, reporting a net income growth of 17.8 per cent year-on-year enabled by solid growth on all our business lines as well as effective cost management,” said Diane Karusisi, chief executive of the bank The bank, however, reported a marginal growth on its assets of 1.7 per cent, reaching Rwf731.8 billion ($842.6 million), resulting from a mounting stock of bad loans as some of the businesses the bank financed are struggling.

According to Nathali Mpaka, chief finance officer, Bank of Kigali, tier-two and tier-three hotels it has financed are struggling to service loans, largely due to growing competition.

As a result, Bank of Kigali reported Rwf34 billion ($38.6 million) in non-performing loans (NPLs) in the first six months of this year, pushing the ratio to 5.5 per cent, which is above the central bank’s 5 per cent benchmark.

Bank of Kigali expects to cross-list on the Nairobi Securities Exchange later this year, as it seeks additional capital to refinance its operations from international investors.

“We have many regulatory approvals to get … but we are hoping that by the end of this year we will have finalised the transaction,” Ms Karusisi said.

Among the Kenyan bank subsidiaries, I&M Bank Rwanda was the most profitable, generating a Rwf3.4 billion ($3.8 million) net profit in the first half of this year June, driven by interest income, compared with Rwf3 billion ($3.4 million) reported during the same period last year.

“Our strong performance in the first half of the year reflects the strength of our business, the quality of our past decisions and the success of efforts to become a customer centric and efficient bank that offers easily accessible products,” said Robin Bairstow, I&M Bank Rwanda managing director.

The bank’s interest income increased by 30 per cent, on the back of loans and investments in government bonds and interbank placements.

Its operating income also grew from auctioning off Phoenix Metals, a tin smelter, in an auction after it failed to service a loan from the bank.

Equity Bank Rwanda reported Rwf2.6 billion ($2.9 million) net profit in the first six months of this year from Rwf1.5 billion ($1.7 million in the same period last year), boosted by a 21 per cent growth in its loan book.

Credit to the public increased by Rwf19.5 billion ($22 million) from Rwf93 billion ($105.6 million) in the first six months ending 2018, to Rwf113 billion, signalling that as the economy picks up, more businesses sought credit to finance their growth.

“Our largest earning assets are loan advances driven by the growing number of customers. Interest from investments and loans and non-funded incomes is the highest driver of our earnings,” said Hannington Namara, managing director of Equity Bank Rwanda.

Mr Namara said banking prospects in the second half of 2018 are positive given the rebound in sectors of the economy and global commodity prices, which are expected to remain high.

“Conference tourism is buoyant with many conferences booked. Tourism is picking up and we expect hotels and logistics firms to seek credit to finance their business,” said Mr Namara.

According to the bank’s financial statement, KCB’s total operating income rose from Rwf6.9 billion in half year ending June 2017 to Rwf7.9 billion ($8.9 million) in the first six months of this year, bolstered by multiple financial solutions the bank deployed to drive revenue growth.

The bank is betting on its upgraded core banking system, which was rolled out on September 3, and a new range of product offerings on its digital platform, to drive growth.

However, Rwandan banking is still weighed down by non-performing loans and provisioning, which are putting pressure on shareholders earnings.

The combination of high loan provisioning and reduced lending, according to experts reduced the banking sector profits.

Data from National Bank of Rwanda shows a decline in new loans to commerce, restaurants and hotels which fell by 14.2 per cent, public works and building 3.2 per cent.